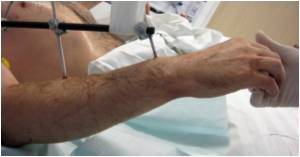 A new study has found that a pattern of genes could soon identify kidney transplant recipients that do not need immunosuppressive drugs for the rest of their lives.

Generally, such recipients need these drugs for a lifetime, but a handful of people, out of the thousands who have undergone transplantation, can stop taking these drugs without losing their kidneys.


In a study on these rare individuals, researchers have identified a pattern of genes turned on in their white blood cells, which may one day be used to help identify other transplant recipients who could reduce or completely taper their immunosuppressive therapy without ill effect.

The authors emphasize that their study looked at "tolerant" patients.

These are patients who had stopped taking their prescribed immunosuppressive medications for at least a year, yet did not reject their kidneys. They are not encouraging others to follow the same course of action.

"The signature that we discovered in these individuals may be useful for identifying kidney transplant recipients who are already tolerant. Whether or not this same signature will identify those kidney transplant recipients still taking immunosuppressive medications who are predisposed to developing tolerance in the future remains unknown," said Newell.

"Carefully supervised studies will be necessary to answer this question as well as to determine whether attempting to completely withdraw all immunosuppressive drugs will prove advantageous in the long term," he added.

"In the vast majority of patients, stopping or reducing immunosuppression medications without doctor supervision will have serious health consequences, including loss of the transplanted kidney. We certainly don't encourage anyone to try this on their own," cautioned Newell.

The ITN study examined 25 kidney transplant recipients who had ceased taking their immunosuppressive drugs and yet had retained normal kidney function for more than one year.

The researchers compared this group with two other groups-recipients who were still taking their medication and had healthy kidneys, as well as healthy, non-transplanted controls.

Further study showed that zeroing in on three B cell genes could distinguish patients who had stopped taking their medications yet maintained good graft function.

White blood cells include both T and B cells. Most studies of immune tolerance have focused on the role of a subset of T cells, called regulatory T cells (Tregs).

However, more recent work in animal models indicates that some kinds of B cells may also help regulate the immune system and promote tolerance of a transplanted organ.

"We expected to find a difference between the tolerant and immunosuppression groups in the genes associated with Tregs. However, we were surprised that our data showed that B cell genes may play an important role in maintaining and possibly inducing tolerance to transplanted organs," said Newell.

The results of the study were reported in the Journal of Clinical Investigation.