Need a Drink After A Tiring Day At Work? Have A Robotic Bartender Make One For You! 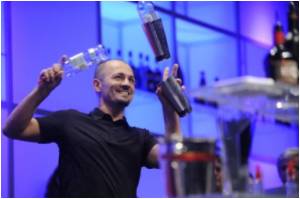 You can rely on a robotic bartender, if you're willing to experiment with some artificial intelligence to prepare your drinks for the evening. The robotic bartender not only prepares the mix but also suggests a strong drink if one has had a long day.

The robotic bartender has been made by co-founder and CEO Barry Givens and uses an Android tablet as its interface, from which the user can view and order from an extensive drink menu, Cnet reports.


Users can also order drinks through an Android and iOS app, but what makes it even interesting is that it can actually learns the user's tastes and lifestyle and suggests drinks accordingly.
Advertisement
For example if a user comes home from work every day at 5 p.m., and the Monsieur, using a Wi-Fi connection at his home, detects when the user comes home and monitors the pattern. If one day the user comes home at 9:30 p.m, Monsieur would offer to make the drink a double instead of a single because the user had a long day at work.

According to the report, the Monsieur comes in several sizes to accommodate home and commercial use and the smallest holds four bottles of alcohol and the largest holds 16 and price ranges from 1,500 dollars to 4,000 dollars.

What Does Carbon Dioxide Taste Like? Fizzy Drinks Can Tell The Human Tongue
A new study has found that the human tongue can taste the "flavour" of carbon dioxide when ......