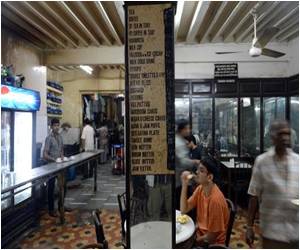 Following an international outrage with its walls bearing swastikas and a painting of Adolf Hitler, a Nazi-themed cafe in Indonesia has now re-opened.

Following the closure, his lawyer told AFP that Mulyana would later reopen his business with a broader World War II theme and said he would remove all swastikas.


But at the opening on Saturday, three huge iron eagles bearing swastikas were on display, as were WWII propaganda posters bearing the Nazi symbol.

Several young men attended the opening dressed in military outfits, including one bearing a swastika on his arm, and some posed for photos as prisoners of war in a mock interrogation room.

Mulyana has tried to broaden his cafe's theme by including images of other wartime figures to his collection, including Winston Churchill and Josef Stalin.

"From the beginning I have said that the SoldatenKaffee is not a Nazi cafe. This cafe's theme is World War II," Mulyana told reporters at the reopening in the western Java city of Bandung.

"All aspects of the SoldatenKaffee are legal. We have a lot of customers from Europe and they don't have a problem with the World War II theme, because it is seen here from a historical perspective," he said.

The SoldatenKaffee ("The Soldiers' Cafe") was named after the popular hangout for soldiers in Germany and occupied Paris during World War II and had operated in Bandung for three years until it was exposed in English-language media.

The reports prompted fierce criticism from abroad, particularly from Jewish organisations, including the LA-based Simon Wiesenthal Center, which expressed its "outrage and disgust" and called for the cafe's closure.

That Mulyana is allowed to keep his cafe open sits in stark contrast to attitudes in Europe, where several countries have criminalised promoting Nazi ideology and Holocaust denial.

The Jewish populaton in Indonesia is tiny, but historians have blamed poor schooling in the country for the lack of awareness and sensitivity of the Holocaust.

Hungry Students Denied Trays in US Campuses to Cut Cafeteria Costs
The cafeteria tray is being elbowed out of US university canteens as campuses change the way students collect their food and look for savings in tough economic times.
READ MORE