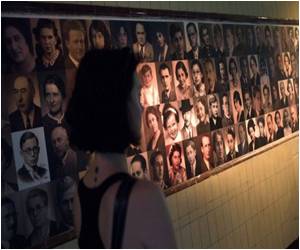 On the 70th anniversary of the forced relocation of Jews during World War II, over 1,000 Hungarians took part in some 160 Holocaust memorial events across Budapest.

After a city hall decree in 1944, authorities forced some 220,000 Budapest Jews to move on June 21 into around 2,000 buildings marked with yellow Jewish Stars of David.

The Jewish residents were also forced to wear the stars on their clothes for around six months while an enclosed ghetto area in the capital's seventh district was being prepared.


Around 1,600 of the "Yellow Star" buildings are still standing, and events such as musical recitals, documentary films, literature readings and theatre performances took place throughout Saturday in the building courtyards and apartments.
Advertisement
"We started at 8 o'clock this morning and will run until midnight in order to force ourselves to acknowledge our past, to face our history, to know who we are," Istvan Rev, one of the main organisers, told AFP, adding that at least 1,000 people attended the different events.

The Yellow Star House day was the largest volunteer-based event in a year of Holocaust memorials marking the 70th anniversary of the deportations of Jews from Hungary to Nazi death camps in 1944.

"My husband's Jewish grandmother was moved to the second floor here," said Judit Szira, pointing up from the courtyard of one of the Yellow Star Houses after a musical performance.

"We have come here to remember her and other family members who died in the Holocaust," she told AFP.

The 70th anniversary year has been plagued by controversy, however, over how to properly commemorate the Holocaust during which around 600,000 Hungarian Jews perished.

Many groups organising commemorations have refused or given back funding from Prime Minister Viktor Orban's government, accusing it of playing down the Hungarian state's complicity in organising the 1944 deportations, a charge denied by the government.

Holocaust Memorial Year to be Boycotted by Hungary Jews
Mazsihisz, Hungary's largest Jewish organisation decided on Sunday that it was pulling out of a ......