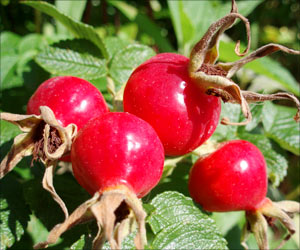 The extract of RoseHip, the fruit of the rose plant shows promising results for preventing breast cancer, reports a new study. Rosehip, the round part of the rose flower located just below the petals, are used as a natural source of vitamin C in tea and other foods.

Triple negative, a type of breast cancer showed reduced growth and migration of cells after they were treated with the extract. This particularly aggressive form of cancer does not respond to most available treatments and tends to affect young women as well as those who are African-American or Hispanic.

For the experiments, the researchers used pure rosehip, which can be purchased as a supplement in pill or liquid form. The scientists treated tissue cultures of triple negative breast cancer cells with several concentrations of rosehip extract. Exposure to the highest concentration (1.0 mg/ml) decreased triple negative breast cancer cell proliferation by 50%.

The breast cancer research grew out of previous studies in which the investigators used rosehip extract to successfully prevent cancer cell growth in the brain, one of the places to which triple negative breast cancer tends to spread. They would also like to test the extract's effects on prostate cancer cells.

Breast Cancer Treatment May Cause Heart Damage
Therapies used in breast cancer may cause heart damage. Be informed; know your options. Save the ......