Museums Capture New Art Enthusiasts With the Power of the Internet 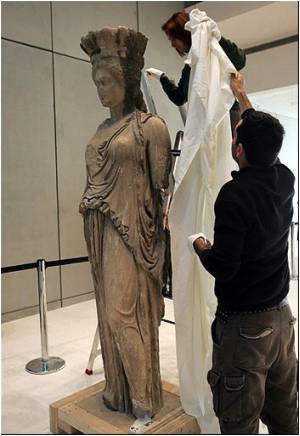 The world's great museums are increasingly using the Internet and social networking sites to pique the interest of people who might never think of setting foot in an art exhibition.

At a click of a mouse, some of the greatest galleries in the world can come to life in a way that has hitherto been near-impossible when seen with the naked eye.

The launch of the Google Art project, taking the cameras used in its Street View site through the doors of 17 museums including MoMA in New York and the National Gallery in London, is the just the latest move into the Internet.


The State Hermitage in Saint Petersburg, Amsterdam's Rijksmuseum and another London heavyweight, Tate Britain, are among the institutions whose selected artworks can be seen in incredible detail.

Documents, videos and a virtual tour of the museum can be accessed at www.verhuetungsmuseum.at
Advertisement
But all the museums featured already have their own websites, so why marry up with the US online giant?

"We have to seek out the Internet user, on social networks, the networking sites, wherever they may be," said Laurent Gaveau, in charge of new media for the Palace of Versailles, the only French museum taking part in the Google project.

And Google can offer technological muscle.

"The use of gigapixel is really new," Gaveau said, referring to the high-resolution system used for capturing the paintings.

By using the zoom function, viewers can see works such as Flemish Renaissance painter Pieter Bruegel the Elder's "The Harvesters" in tiny detail -- even the modest meal the peasants are enjoying in the field is clear as day.

The other innovation is the ease of taking a virtual tour around a number of the world's finest museums -- you can either see the pictures up close, or take a stroll around the galleries.

Charlotte Sexton from Britain's National Gallery said museums were convinced that the Google site -- far from harming the traffic to their own websites -- could actually capture a new audience and even persuade people to come to the museums.

"There is plenty of evidence that shows that by engaging with relevant content online it actually can be a driver to encourage people to go and see the real thing -- you can't underestimate the thrill of the original," she said.

"And for many they may never be able to visit physically but they can have a meaningful virtual experience."

"There is no conflict between virtual visits to the museum and real visits," she said. "One adds to the other."

But not all museums are convinced about Google Art.

The Louvre in Paris, a true giant of world culture and home to Leonardo da Vinci's "Mona Lisa", spurned Google's advances and chose instead to build up its own website, which currently receives 11 million visits a year, compared to 8.5 million visitors in the flesh.

The Palace of Versailles says the benefits of moving online have been huge.

The Heartbreak Museum: Croatia Displays the Symbols of Unsuccessful Love

An iron used for a wedding suit, a rear-view mirror broken in a jealous fit and a lower leg prosthesis -- at first it's hard to find any link between the items on display at a new museum in Croatia.
Advertisement
<< Fluorescent Peptides-Enhanced 'Glowing Nerves' To Make Surg...
Unusual Berlin Museum >>