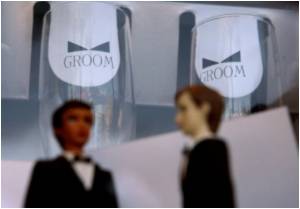 The Gay Lesbian Bisexual Transgender (GLBT) Museum had a "soft opening" a day early, with founders cautioning that a few pieces had yet to be completed.

As Brazil gets ready for its annual carnival, a group has broken out over the issue of toilets for the exclusive use of gays and transvestites in samba schools.
Advertisement

"We have gone all out to create a museum as rich, diverse and surprising as the GLBT community itself," said GLBT Historical Society executive director Paul Boneberg.


On display are pink-framed sunglasses, a whistle, Levi jeans and other belongings of Harvey Milk, the city's first openly gay elected official.

Milk was assassinated in 1978 and his colorful and poignant story was captured in a film starring Sean Penn.

The Spanish city of Barcelona will erect a monument to gays, lesbians and transgendered people who have been persecuted and repressed throughout history , it announced Thursday.
Advertisement
Exhibits were also said to include sex toys.

"The GLBT History Museum is in the heart of the Castro, a neighborhood visited not only by locals, but also by tens of thousands of tourists every year who come in search of queer culture," Boneberg said.

"At our museum, they'll discover treasures from our archives that reflect fascinating stories spanning nearly a century of GLBT life."

An opening gala complete with ribbon cutting was planned for Thursday.

The museum was billed as the second of its kind, the first having been opened decades ago in Berlin.

The United States stood on the cusp of letting gays serve openly in its military for the first time, as the US Congress sent President Barack Obama a bill to bring about the historic shift.
Advertisement
<< Malaysian Health Advisory: Some Sex Products Cause Ill Heal...
How NOT to Get Sacked: Top Ten Tips on Keeping Your Job >>