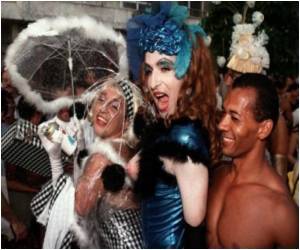 As Brazil gets ready for its annual carnival festivities, a group has broken out over the issue of toilets for the exclusive use of gays and transvestites in samba schools that is getting ready for the main event.

Protesters claim the recent designation in the premises of Unidos de Tujuca, one of the top Rio de Janeiro samba schools preparing a parade for the March 4-9 carnival, resembles the forced separation of blacks and whites in the past.

The Spanish city of Barcelona will erect a monument to gays, lesbians and transgendered people who have been persecuted and repressed throughout history , it announced Thursday.
Advertisement

"They are carnival apartheid!" Claudio Nascimento, the head of a government anti-homophobia program, raged to reporters.


But defenders of the segregated conveniences argued they provided a safe area for gays and transvestites.

In bizarre news, a Brazilian woman, who was declared dead at a hospital woke up in a funeral parlour hours before she was to be buried.
Advertisement
Gays, lesbians, bisexuals and transgenders merely have the option to use the special bathrooms, and can still opt to go to the ordinary ones, he said.

Gay militants, though, were divided on the issue, with some complaining they would risk stigma just by using the special toilets.

"It's a step backwards and encourages discrimination," a male stylist told the GloboNews television network.

But a transvestite shot back that he would "feel a lot more comfortable" using the reserved bathrooms.

Unease over the initiative has increased since it came to light that four other samba schools had already discreetly introduced separate toilets.

Dona Benta, the administrative head of one of the schools, Vila Isabel, told the O Dia daily that "the separate toilets came about through demands from homosexuals themselves" who wanted "more freedom."

Rio de Janeiro is considered one of the most gay-friendly destinations in the world.

Yet homophobia remains rampant in Brazil, where gay killings have risen 62 percent in two years compared to 2009, when 198 such murders were reported.

Loram (2 mg) (Lorazepam) Indian Medical Journals Drug - Food Interactions Noscaphene (Noscapine) Find a Hospital Accident and Trauma Care Color Blindness Calculator Blood Pressure Calculator Find a Doctor Nutam (400mg) (Piracetam)
This site uses cookies to deliver our services. By using our site, you acknowledge that you have read and understand our Cookie Policy, Privacy Policy, and our Terms of Use