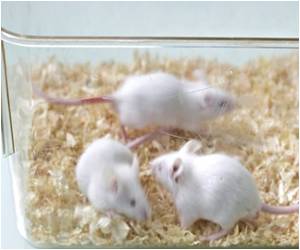 Scientists from the Stanford University School of Medicine have now created a mouse model of muscular dystrophy, in which the degenerating muscle gives off visible light.

The observed luminescence occurs only in damaged muscle tissue and in direct proportion to cumulative damage sustained in that tissue, permitting precise monitoring of the disease's progress in the mice, the researchers say.

While this technique cannot be used in humans, it paves the way to quicker, cheaper and more accurate assessment of the efficacy of therapeutic drugs. The new mouse strain is already being employed to test stem cell and gene therapy approaches for muscular dystrophies, as well as drug candidates now in clinical trials, said Thomas Rando, MD, PhD, professor of neurology and neurological sciences and director of Stanford's Glenn Laboratories for the Biology of Aging.


Rando is the senior author of a study, to be published online April 24 in the Journal of Clinical Investigation, describing his lab's creation of the experimental mouse strain in which an inserted gene coding for luciferase, the protein that causes fireflies' tails to glow, is activated only in an important class of rare stem cells that, collectively, serve as a reserve army of potential new muscle tissue. Under normal circumstances, these muscle stem cells, or "satellite cells," sit quietly adjacent to muscle fibers. But muscular injury or degeneration prompts satellite cells to start dividing and then to integrate themselves into damaged fibers, repairing the muscle tissue.
Advertisement
Muscular dystrophy is a genetically transmitted, progressive condition whose hallmark is the degeneration of muscle tissue. There are many different forms, whose severity, time of onset and preference for one set of muscles versus another depends on which gene is defective. But as a general rule, the disease begins to develop well before symptoms show up.

As the muscle fibers of someone with muscular dystrophy die off, nearby satellite cells  which are normally dormant in the tissue  begin replicating in an attempt to replace the lost muscle tissue. "But in the end, satellite cells' attempt to restore tissue is overwhelmed," said Rando, who is the founding director of Stanford's Muscular Dystrophy Association Clinic.

No truly effective treatments for muscular dystrophy exist. "Drug therapies now available for muscular dystrophy can reduce symptoms a bit, but do nothing to prevent or slow disease progression," said Rando. Testing a drug's ability to slow or arrest muscular dystrophy in one of the existing mouse models means sacrificing a few of them every couple of weeks and conducting labor-intensive, time-consuming microscopic and biochemical examinations of muscle-tissue samples taken from them, he said.

So Rando decided to design a better mouse. Dozens of mouse models of different varieties of muscular dystrophy, designed to best reflect different forms of the disease, already exist. Rando's team chose to start with a strain whose human analog is called limb-girdle muscular dystrophy. This steadily progressive form of the disease, whose clinical manifestations typically are most pronounced in limb muscles close to the torso (the thigh versus calf, or upper arm versus forearm), begins during the second or third decade of life, after the muscle-building burst of childhood is largely complete.

From that "starter" mouse strain, Rando's team developed another strain of mice that were prone to the same disease process but whose muscle cells contained the luciferase gene. When these mice are 2 months old, Rando and his associates use a sophisticated laboratory technique to activate the luciferase gene in the mice's satellite cells.

Once a luciferase gene is activated in a satellite cell, it stays "on" permanently in that cell and in all of its progeny, including mature muscle cells, causing them to glow whenever the mice are given a compound that gives off light in the presence of luciferase. So, as the muscular dystrophy progressed in the new mouse strain, the damage it inflicted on muscle fibers and the ensuing recruitment of neighboring satellite cells resulted in the affected muscle tissue's being increasingly luminescent. This luminescence, which could be observed through the mice's skin, was strong enough to be monitored and attributed to a precise anatomical location by a highly sensitive camera.

Invasive microscopic and biochemical methods are first able to detect disease symptoms in mice with the limb-girdle-analog strain when they are about 6 months old. In contrast, using this new method, the Stanford team could literally "see" the first signs of the disease's manifestation as early as 3 months.

Rando and his colleagues confirmed the validity of their luminescence assay with parallel examinations of the mice by standard microscopy and biochemical analysis. They also confirmed, in potentially luminescent but otherwise normal mice not suffering from progressive muscle deterioration, that healthy muscle tissue is ordinarily quiescent. In these mice, the Stanford scientists observed negligible luminescent output reflecting the less than 1 percent of all cells in muscle tissue that are satellite cells.

"In these luminescent mice, we could pick up the disease's pathological changes well before they could be seen otherwise," said Rando. "The readout was so sensitive we could observe those changes within a two-week period. Not only that, but we got our measurements instantaneously, without killing the mice."

The new assay's speed, accuracy and relative noninvasiveness will advance the pace of preclinical work, Rando said. "A lot of head-to-head comparisons of muscular-dystrophy therapies, including drugs already in clinical trials as well as stem cell therapies and gene therapies on the near horizon, can now be made that couldn't have been tried before, because they would have been too expensive and time-consuming to make them worth the effort."

Dysarthria
Dysarthria is a condition characterized by speech difficulty due to poor or weak speech muscle ......