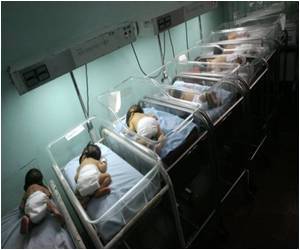 A new study has found that mother's heartbeat and voice could help lower incidence of cardiorespiratory events in premature infants.

Normally when babies are born prematurely, they are thrust into a hospital environment that while highly successful at saving their lives, is not exactly the same as the mother's womb where ideal development occurs.

The Neonatal Intensive Care Unit (NICU) is equipped with highly skilled care givers and incubators that regulate temperature and humidity, but Amir Lahav, director of the Neonatal Research Lab at Brigham and Women's Hospital (BWH) thought that something was missing - simulation of the maternal sounds that a baby would hear in the womb.


"Our findings show that there may be a window of opportunity to improve the physiological health of these babies born prematurely using non-pharmalogical treatments, such as auditory stimulation," Lahav, principal investigator of the study, said.

Fetal monitoring records the condition of the fetus and contractions of the uterus during the labour
Advertisement
Since they are underdeveloped, preterm infants experience high rates of adverse lung and heart events, including apnea and bradycardia.

The researchers sought to determine whether an auditory intervention could affect the rates of these unwarranted cardiorespiratory events.

To conduct the study, Lahav enrolled fourteen extremely premature infants (born between 26-32 weeks gestation) that were admitted to the NICU at BWH.

The infants were assigned to receive an auditory intervention of maternal sound stimulation (MSS), four times per day throughout their NICU hospitalization.

Each infant received a personalized MSS-a soundtrack that consisted of his or her own mother's voice and heartbeat. The recording was played into the infant's incubator via a specialized micro audio system developed in Lahav's lab.

Overall, researchers found that cardiorespiratory events occurred at a much lower frequency when the infants were exposed to MSS versus to routine hospital noise and sounds. This effect was statistically significant in infants of 33 weeks gestation or older.

"Our findings are promising in showing that exposure to MSS could help preterm infants in the short-term by reducing cardiorespiratory events. The results also suggest that there is a period of time when the infant's auditory development is most intact that this intervention of MSS could be most impactful.

"However, given our small sample size of 14 infants, further research is needed to determine if this intervention could have an impact on the care and health of preterm infants," Lahav said.

The study has been published online in The Journal of Maternal-Fetal and Neonatal Medicine.

Preterm Infants Learn to Speak Fast If Parents Converse With Them

The rate of the vocabulary growth and IQ score are more strongly related to the number of words the parent says per hour to the child than to parent's education and socioeconomic status.
Advertisement
<< New Discovery Holds Promise For Weight Loss
Lab-made Organs Could Help Solve Global Organ Donor Shortag... >>