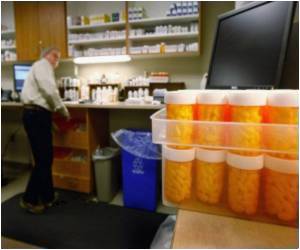 A way to measure the action and function of candidate prescription drugs on human cells, including the response of individual cells, more quickly and on a larger scale than ever before has been developed by scientists at the University of Toronto, Stanford and Columbia Universities.

The researchers say their "mass cytometry" technology has the potential to transform the understanding of a variety of diseases and biologic actions, and will provide a better tool to understand how a healthy cell becomes diseased. Clarifying the underlying biochemistry of cells may enable earlier detection of illness and ultimately advance personalized medicine, notably for cancer and HIV treatments, by offering more and less aggressive options for treatment.

"We've shown that drug response is specific to certain sub-populations of cells, and gained insight into the signaling cascade that defines that response" says Scott Tanner of U of T's Department of Chemistry, who led the development of the technology used in research to be published this week in Science. "We've also shown that a drug can activate or suppress multiple response pathways simultaneously, and that these responses are modified when a combination of drugs are administered."


"Together, this suggests that the technology will be of significant value in the development and validation of rational drugs to target particular pathogens - a quantum step towards the provision of personalized medicine," says Tanner.

Several drugs are either banned or withdrawn after introduction in the market.
Advertisement
Mass cytometry allows simultaneous measurement of as many as 100 biomarkers - specific physical traits of cells used to measure or indicate the effects or progress of a disease, illness, or condition - in single cells, at 1000 cells per second. It applies the analytical capabilities of atomic mass spectrometry - used to measure the number and type of atoms that comprise a sample - to the technique of flow cytometry, which is a method of examining thousands of microscopic particles per second by suspending them in a stream of fluid or gas and passing them through an electronic detection apparatus. The two very disparate disciplines previously had no reason to be combined.

The U of T scientists developed the chemistry and methods of attaching the metal atoms necessary for the detection of the vanishingly rare biomolecules of interest at the individual cell level, where personal therapeutic response is defined. They also developed a unique instrument to simultaneously measure a large number of these diagnostic signals for individual cells at a high analysis rate.

Drugs and Cosmetics Rules state that schedule H and Schedule H1 drugs are to be sold only against a ...