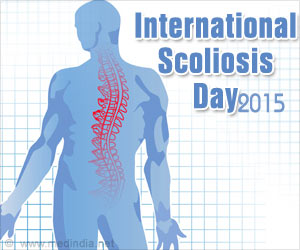 Usually bracing is recommended for adolescents diagnosed with idiopathic adolescent scoliosis, and a spinal curve between 25 and 45 degrees. When worn consistently and as directed, braces have been found to effectively halt or slow further progression of a spinal curve, often preventing surgery.

In a new study appearing in the Journal of Bone and Joint Surgery, adolescent scoliosis patients each received a brace with embedded sensors to monitor use. Patients were then divided into two groups. In the first group, 93 patients were told about the existence and purpose of the monitors, and data and time spent wearing the brace were discussed at follow-up visits. The 78 patients in the second group were not told about the purpose of the monitors, nor did they receive data on brace compliance.

Features of the new implant include wireless charging and data transmission and the device can be customized for better individual results.
Advertisement
‘Idiopathic adolescent scoliosis patients who wore their brace were less likely to require surgery, by 11 percent, due to less spinal progression.’

"Patients who were aware that their device measured brace use, wore their brace, on average, an additional three hours each day," said orthopaedic surgeon and lead study author Lori Karol, MD. The study also found that patients who wore their brace were less likely to require surgery, by 11 percent, due to less spinal progression.


The average curve magnitude at the start of bracing was comparable at the start of the study: 33.2 degrees in the counseled group and 33.9 in the non-counseled group. Among the specific findings:"Shared information between the teen, parents, orthotist (who oversees the creation and fit of the custom brace), and physician resulted in improved brace compliance," said Dr. Karol. "These findings emphasize the role that open doctor-patient communication plays in encouraging treatment effectiveness in the adolescent age group."

Many Kids With High-Risk Scoliosis may Benefit from Wearing Braces

Adolescents suffering from most common form of scoliosis, or curvature of the spine, can benefit from wearing a back brace.
Advertisement
<< Postnatal Depression Linked to Challenges in Parenting
Female Beetles are More Attracted to 'Small' Partners >>

The first gene to be associated with adolescent idiopathic scoliosis across Asian and Caucasian populations has been discovered by scientists.

The Essence of Yoga Blood - Sugar Chart Calculate Ideal Weight for Infants Iron Intake Calculator Drug - Food Interactions A-Z Drug Brands in India Drug Side Effects Calculator Blood Donation - Recipients Color Blindness Calculator Hearing Loss Calculator
This site uses cookies to deliver our services.By using our site, you acknowledge that you have read and understand our Cookie Policy, Privacy Policy, and our Terms of Use  Ok, Got it. Close
×