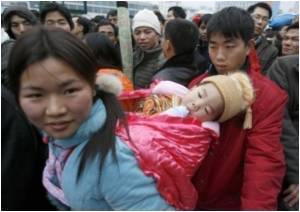 Missing their baby's first word when at work is a reality for more than one in twenty working mothers, disclosed a study.

A Tesco study revealed that one in four mums has missed out on key moments in her child's life, and almost 23 per cent blamed it on their return to work.

The study revealed 38 per cent of mums were upset about missing out but nearly twice as many felt guilty about it.


The first school sports day is the milestone mums are most likely to skip with almost one in 10 failing to make it, the study found.

"For a mum, witnessing the first time your baby smiles, speaks or walks is one of the most rewarding moments of motherhood," the Daily Express quoted Jenna Bannerman, Tesco Baby and Toddler Club spokeswoman as saying.

Working Mums Do Not Harm Their Kids Mental Development

A new study has found that mothers who work during infancy do not necessarily harm their children's mental development.
Advertisement
"Nothing can make a mum feel more proud of their offspring than watching as they reach each -childhood milestone," she added.

Bannerman said: "It's not easy for many mums to be there all of the time and it's inevitable they will miss out on some milestones."

Parents who run between their jobs and raising a family feel up to 11 years older than their stay-at-home counterparts, according to a new research.
Advertisement
<< American Eats the Most Hot Dogs to Win One of the Wierdest ...
Genes Causing Hair Loss Identified >>

Blood Pressure Calculator Indian Medical Journals Diaphragmatic Hernia How to Reduce School Bag Weight - Simple Tips Pregnancy Confirmation Calculator Drug - Food Interactions The Essence of Yoga Vent Forte (Theophylline) Selfie Addiction Calculator Find a Hospital
This site uses cookies to deliver our services. By using our site, you acknowledge that you have read and understand our Cookie Policy, Privacy Policy, and our Terms of Use