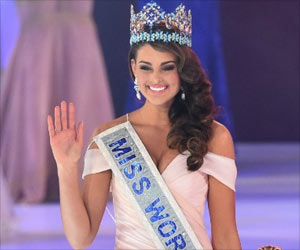 Miss World 2014 crowned in London on Sunday and the crown adorned Miss South Africa - 22-year-old Rolene Strauss. Estimates show that a billion viewers were watching the show around the globe.

Strauss clasped her hands together in surprise and was presented with the sash by the outgoing Miss World, Megan Young of the Philippines.


The medical student sat in the winner's throne as the 2013 champion put the glittering crown on her head before a fireworks finale at the ExCeL exhibition centre in east London.

"South Africa this is for you," Strauss said afterwards.

"I think I will brace myself for what's about to happen. It's a huge responsibility."

Miss World Celebrates 60th Birthday
Miss World homecoming to Britain, with all its glitz and glamour, for the global beauty contest to ....

China Desert City Kicks Off Miss World Pageant
In the unlikely setting of a Chinese mining city on the edge of the Gobi desert, global beauty ......