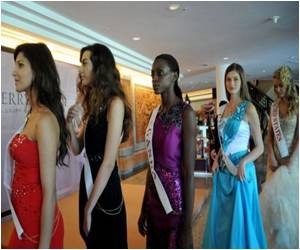 Even as hardline Muslims continue to protest against the beauty pageant, Miss Philippines was crowned as the Miss World 2013 on the Indonesian resort island of Bali on Saturday.

Hundreds of Islamic radicals held a prayer session in a mosque near the capital to express their anger, while Megan Young wept as she won the coveted title on Hindu-majority Bali at the end of a three-week contest.

The 23-year-old, wearing a pearl white gown, promised to be "the best Miss World ever" in front of a cheering crowd, which included many Filipinos, in a venue guarded by heavily armed police and water cannons.


The final was moved to Bali, where there is little hardline influence, from its original venue just outside the capital Jakarta after thousands of protesters took to the streets across the world's most populous Muslim-majority country.
Advertisement
Denouncing the pageant as a "whore contest" and "pornography", the demonstrators pressured authorities into shifting the venue, the latest sign of the growing influence of country's hardline fringe.

Hundreds of police were deployed across Bali for Saturday's final, which saw 127 contestants clad in stilettos and shimmering gowns take to the stage in the Nusa Dua resort, southern Bali.

The contestants were quickly whittled down to six. Then, they faced a question-and-answer round before the winner was announced in a contest broadcast to more than 180 countries.

Young, who is studying digital media and also presents TV shows in the Philippines, pledged to "just be myself in everything I do, to share what I know and to educate people".

Adding to security concerns in the run-up to the final, the American, British and Australian embassies had warned that extremists might attack the pageant.

Bali has suffered extremist attacks before, notably in 2002 when bombings killed more than 200 people, most of them foreign tourists.

But Saturday's finale passed off smoothly, with no new protests or security scares -- despite a pledge by prominent hardline group the Islamic Defenders' Front (FPI) to stage demonstrations.

Hundreds of members of the FPI and other hardline groups limited themselves to holding a prayer session in a mosque in Sentul, just outside the capital Jakarta, to express their opposition to the pageant.

Organisers had originally planned to hold the final in a 10,000-seat venue in Sentul, before being forced to move to a 2,000-seat centre in Nusa Dua.

Those at the prayer gathering were addressed by a Muslim preacher who lashed out at the pageant, which radicals claim goes against Islamic teaching, said FPI member Ustad Maman.

"Indonesia has already shown how it feels about Miss World -- we rejected it here, we reject it anywhere," he told AFP.

Maman said that 5,000 FPI members showed up for the prayer session, although police put the figure at 1,000.

Hardliners in Indonesia have succeeded in getting numerous events deemed "un-Islamic" changed or cancelled in recent times.

Last year, Lady Gaga axed a concert after threats to burn down the venue and criticism for wearing only "a bra and panties".

In a bid to reduce hardline anger, organisers also took an early decision this year to axe the famed bikinis from the "beach fashion" round, replacing them with Balinese sarongs.

A total of 129 contestants had been due to compete in the final, but two pulled out at the last minute, according to organisers.

While the popularity of Miss World, first held in 1951, has waned in the West, continued interest in Asian countries ensures that the final rakes in a huge global television audience.

Venezuela has produced the most Miss Worlds, with six winners, while India and Britain claim five titles each.