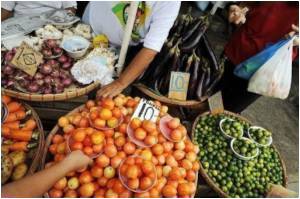 Indian farmers are injecting a hormone sometimes given to women during childbirth into vegetables and fruits to make the produce ripen sooner and gain weight, an Indian minister has warned.

In a letter to health ministry officials seen by AFP, junior health minister Dinesh Trivedi demanded a nationwide crackdown on the illegal use of the prescription drug Oxytocin, which he said can cause serious health problems if taken over a long period.


"These hormones may cause irreparable damage to our health, if taken through these vegetables, over a period of time," he stated, listing heart disorders, sterility, nervous breakdowns and memory loss as possible side effects.


He said the hormone, used to induce childbirth and lactation in women, is injected in pumpkin, watermelon, aubergine and cucumber plants to make them bear bigger fruit.

The injection can also be administered to fruit and vegetables just before they come to market to make them appear more plump and fresher.

Though the drug is banned for use in animals, it is often illegally used in cattle to boost milk production.

India's health ministry banned Oxyotocin for public sale after a series of media reports about the drug being administered to underage girls in rural Rajasthan to make them look older before their marriages.

In neighbouring Bangladesh, sex workers are often given the steroid drug Oradexon, a form of Oxytocin, for the same reason.

Despite the ban on public sales of the drug in India, the hormone is still easily available from fertiliser and pesticide vendors, an official in the health ministry told AFP.

Oxytocin: Outstanding Hormone, Outlandish Uses
The hormone Oxytocin has been lovingly referred to as the 'cuddle chemical' or the 'love drug.' But it now plays a dubious role in promoting prostitution.
READ MORE