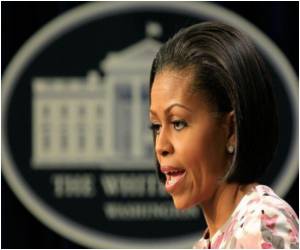 Having supported the 'Let's Move' campaign for the past few years, US first lady Michelle Obama is now encouraging Americans to 'Drink Up' for a healthier life.

The president's wife called on Americans to drink at least one extra glass of water daily.

"I've come to realize that if we were going to take just one step to make ourselves and our families healthier, probably the single best thing we could do is to simply drink more water," Obama said in a statement.


"That's it - it's really that simple. Drink just one more glass of water a day and you can make a real difference for your health, your energy, and the way you feel. So Drink Up and see for yourself," she said.
Advertisement
The first lady cheekily planned to launch her new initiative in Watertown, in the midwestern US state of Wisconsin, alongside actress Eva Longoria.

As part of its efforts to encourage hydration, a special logo will be printed on hundreds of millions of water bottles as well as on some 10,000 public water fountains.

The public relations campaign will also encourage people to upload photos of themselves imbibing on the website www.youarewhatyoudrink.org and on social media photo-sharing site Instagram, tagged "drinkH20."

Obesity is a major health issue in the United States, where one in three adults and nearly one in five children are obese.

The campaign does not specifically urge Americans to replace drinks of soda with water, although the sugary drinks are often considered partly to blame for expanding waistlines.