Michelle Obama Directs The Drive Against Childhood Obesity to NAACP 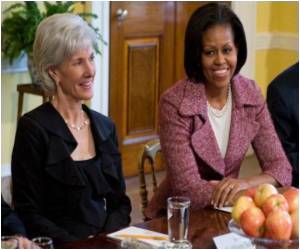 US First Lady Michelle Obama directs the campaign against childhood obesity to the National Association for the Advancement of Coloured People's annual convention.

At the NAACP convention, Michelle, 46, mixed homespun stories of her youth with a call to action urging members of the African-American community to help fight the epidemic.

Neck Circumference is a True Measure of Child Obesity

A new study suggests that the circumference of a child's neck could provide a great indication of any obesity problems.
Advertisement

As she pushed her Let's Move initiative she called on the standing-room-only crowd of more than 4,000 to help her get African-American children "off that couch and get moving".


She said the issue is a "serious" one that "cries out for attention" in African-American communities, because they are being affected the most.

Michelle Obama has called on food giants to take measures to help curb child obesity.
Advertisement
"We are living today in a time where we're decades beyond slavery, we are decades beyond Jim Crow; when one of the greatest risks to our children's future is their own health," the Politico quoted her as saying.

"So we need to take this issue seriously, as seriously as improving underachieving schools, as seriously as eliminating youth violence or stopping the spread of HIV/AIDS or any of the other issues that we know are devastating our communities," she said.

She also urged parents in the audience to act as role models and push their children to exercise and eat healthier.

"As I tell my kids, dessert is not a right," she said to laughter.

"No one wants to give up Sunday meals. No one wants to say goodbye to mac and cheese, fried chicken and mashed potatoes. Not even the Obamas trust me," she added.

Childhood obesity is one of the most serious health challenges in the developing countries and needs to be ...