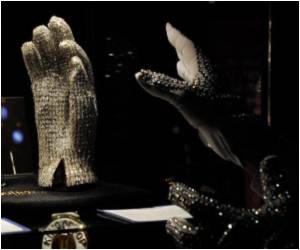 Thanks to an autograph hunter in Las Vegas who asked to borrow a pen, a French perfumer is poised to launch his-and-hers fragrances in memory of Michael Jackson.

Inspired by plants that grow at the late King of Pop's Neverland Ranch, "Jackson's Tribute" for men and "Jackson's Legend" for women, both eau de parfums, will be formally launched on March 7 in the United States.

Michael Jackson 'killed Himself by Overdosing': Popstar's Doc to Claim in Court

Julian Rouas Paris, manufacturer of own-brand and private-label fragrances, formulated the scents in just a fortnight, under a partnership deal signed in California last month with the patriarch of the Jackson family.


"With Joe Jackson, we are 50-50 partners in world sales, television rights and advertising receipts," said chief executive Franck Rouas, adding that a part of the proceeds will go to charities favoured by Michael Jackson.

The auction house that is putting Michael Jackson's memorabilia under the hammer in Macau has dismissed accusations that the sale goes against the singer's wishes, a report said Sunday.
Advertisement
As he tells it, Rouas -- a one-time French tennis instructor to Hollywood stars -- was manning his company's stall at a trade fair in Las Vegas when two young autograph hunters asked to borrow his pen.

The Jackson family was nearby, they said, so Rouas immediately gave him not only his pen, but also two samples of Versailles, one of his firm's own brands, with instructions for them to be given to Janet Jackson.

One hour later came an invitation for Rouas to meet the Jackson family in a private salon, the perfumer said. There, the Jacksons expressed interest in his products; Rouas in turn proposed various fragrances.

Following further negotiations, the musical clan settled on a fruity floral blend for women and a more musky version for men, said Joseph Rubino, 63, the master perfumer whose nose perfected both scents.

Developing the scent -- which purports to capture the prevailing floral aroma at Neverland -- took just two weeks. "We did it very very quickly," said Rouas. "Usually it takes a year."

"There's been lots and lots of luck in this story," added Rubino, from Grasse, the small town in the hills above the French Riviera that is the heart of the French perfume industry.

News of the scents came as a court in Los Angeles ordered physician Conrad Murray to stand trial for involuntary manslaughter over Jackson's sudden death on June 25, 2009 at the age of 50 from an overdose of powerful sedatives.

In Los Angeles, a spokesman for Michael Jackson's estate said the perfume venture was "a Joe Jackson deal" in which it was not involved.

Pre-orders and expressions of interest have already come to Rouas from as far afield as Southeast Asia and southern Africa, and a dedicated website is to be launched in the coming days, the perfumer said.

Another line of Michael Jackson signature perfumes, "Magic Beat", launched in 1986, was aimed at teenaged girls but failed to take off.

Rouas, 38, a native of Nice who has lived on the West Coast of the United States for 15 years, happened upon the perfume business in 1996 when he met industry professionals at a charity soiree in Monaco.

Having sold insurance, real estate and windows, he began trading perfume in the United States while initially remaining a tennis pro to the likes of film star Sharon Stone and Michael Glaser of television's "Starsky and Hutch".

Ever open to new opportunites, Rouas said he has been contacted by troubled starlet Lindsay Lohan, just out of prison, to create a perfume in her name -- to be called "Freedom".