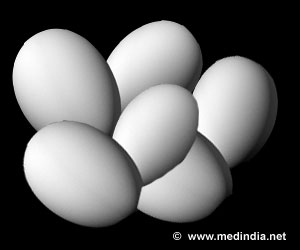 Mexicans are dealing with a severe shortage of eggs following a bird flu outbreak that led farmers to kill more than 11 million hens.

Mexico City residents are waiting in long lines to buy subsidized eggs, while in the north some are crossing the border to get cheaper cartons in US supermarkets.

As part of emergency measures, the government has lifted egg tariffs, importing 906 tons from the United States since the crisis erupted last month. More may come from Costa Rica, Colombia and Chile.


Some Mexican stores are even rationing sales, barring people from buying more than two cartons of eggs per person. In many places, the price of a kilo of eggs has doubled from 20 pesos ($1.50) to 40 pesos ($3), or even tripled.

The Zone Diet is a weight loss program with a '40:30:30' plan for carbohydrates, fats and proteins respectively.
Advertisement
The average Mexican eats 22.4 kilograms of eggs per year, according to the National Poultry Farmer Union. Given that a one-kilo carton contains 16 to 18 eggs, this means each Mexican gobbles up 350 to 400 "huevos" per year.

"It is an essential food," Bertha Padilla Ramirez, a 53-year-old grandmother, told AFP after she bought a 30-egg carton at a mobile egg distribution drive in a poor neighborhood of the capital.

"We eat eggs because meat is too expensive."

Eggs are a cheap source of protein in Mexico, where almost half of the population of 112 million lives under the poverty line.

Here they are served with other staples, like beans and rice, or mixed in "salsa verde" (green sauce).

Prices jumped last month after a bird flu outbreak forced farmers to cull 11 million hens in the western state of Jalisco in June.

The government has vowed to punish price gougers.

"It is a psychological crisis for a homemaker because we can't feed our children," Padilla Ramirez said, as she and dozens of other people stood in line to get their two-kilo carton of eggs.

For the past four weeks, she has mostly cooked rice and beans for her household of seven people. Usually, she cooks around 10 eggs per day for her husband, three children and two grandchildren.

"Come back quickly," she told the coordinator of the weekly egg distribution drive set up in Mexico City's Coyoacan district.

Authorities are now allowing residents of border states to pass through customs with eggs they buy in US stores.

While the price of 30 eggs has jumped to 60 pesos in the border city of Nuevo Laredo, residents say they can buy a dozen Grade-A large eggs for $1.38 (19 pesos) in Texas.

Some doubt that liberalizing imports will lower prices, since bringing eggs from abroad is expensive.

"While it may help a little, it will never lower prices and it will not be a better product than what we produce in Mexico," said Homero Villarreal Cerda, adviser of the Nuevo Laredo Chamber of Commerce.

The federal consumer protection agency meanwhile is urging people to look for other affordable sources of protein, such as tuna, under a program called "You Choose to Eat Well."

"I recommend that during this lack of stability, the consumer takes his responsibilities and does not allow this type of abuse. Change your diet, look for other types of protein," he said.

But since many meats remain too expensive for poorer Mexicans, their options are limited.

At the egg distribution drive in Coyoacan, Monserrat Rojos, 23, and her husband Carlos Acuna, 26, each bought a 30-egg box.

"Beans, rice, tortillas and eggs must always be on the table," said Rojos, whose mother and grandmother also live with the couple. "We will eat three eggs per week. We will ration and be very careful with them as long as possible."

Pomegranate is a naturally occurring mystical and miraculous superfood with multiple therapeutic properties. Since centuries, pomegranate has been revered as a sacred symbol of prosperity, fertility, youthfulness and a life giving fruit.
Advertisement
<< No Evidence of Increased Risk of Cancer from Biologic Thera...
Research Sheds Light on Harnessing Anticancer Drugs for the... >>

Test your Knowledge on Heart Transplantation
View all
News Archive
News Resource
Advertisement
News Category
Do Instant Formula Foods Cause More Harm Than Good? Is a Plant-based Meat Healthier Than Animal Products? Are You Eating Enough Fiber to Stay Healthy? Preventive Vitamin A Supplementation is Missed by 2 in 5 Indian Kids Does a Mother's Diet Affect the Quality of Breast Milk?
More News
Sign up for Wellness Consult a Doctor Sign up for Selfcare