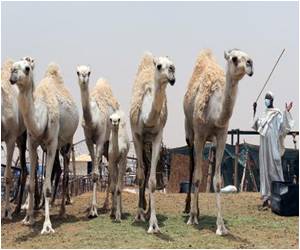 Warnings of spike in cases of the Middle East Respiratory Syndrome coronavirus (MERS-CoV) has been issued by Saudi authorities on Tuesday, because of the risk posed from newborn camels.

The World Health Organization (WHO) has cited the preliminary results of studies indicating that people working with camels are at increased risk of infection from MERS-CoV, and young camels are particularly susceptible.
Advertisement

Doctor Abdul Aziz bin Saeed, who heads the health ministry centre coordinating the response to MERS, told AFP a surge typically occurs around this time of year and "could be very likely" again without proper health education efforts.


"By this time they are two months, three months (old).... They are vulnerable to the infection and so you have more camels at risk of getting the infection. So you have more infected camels right now circulating," he said.
Advertisement
The kingdom has been hardest hit by the virus, which was first identified three years ago. A total of 857 people have been infected there, 366 of whom have died, according to health ministry data.

A public awareness campaign is ongoing, with the WHO urging people working with camels to pay particular attention to personal hygiene.

The ministry recommends proper hand-washing, and coughing and sneezing into a tissue, as among the steps to reduce the risk of infection.

Symptoms of MERS can include fever, a cough and difficulty breathing.

More than 20 countries have been affected by MERS since 2012.

Quiz on Middle East Respiratory Syndrome (MERS)
MERS is a viral disease that has caused grave concern in the Arabian region. Test your knowledge on ...

Top Facts on Asthma
Asthma is a chronic respiratory disease in which your airways narrow, swell and produce extra ......