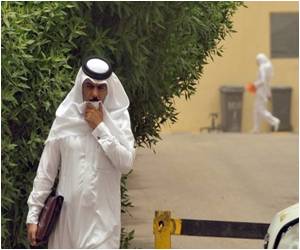 The death toll from MERS in Saudi Arabia has risen to 126 since the respiratory virus first hit the nation in 2012, the health ministry revealed.

Two men, aged 47 and 60, died in the western city of Medina on Wednesday, an 84-year-old man died in Mecca and a fourth died in the Red Sea port of Jeddah.

All three cities are closely associated with the annual Muslim hajj pilgrimage, with commercial capital Jeddah being the main point of entry for pilgrims from overseas.


The fifth person to die was a woman, who succumbed in the capital Riyadh, the ministry's website reported.

It added that the total number of infections from Middle East Respiratory Syndrome coronavirus (MERS-CoV) in the Gulf nation was now 463.
Advertisement
MERS cases have also been reported in the United Arab Emirates, Jordan, Egypt, Lebanon and even the United States, with most involving people who had travelled to Saudi Arabia or worked there, often as medical staff.

The great majority of deaths from the virus have been in Saudi Arabia, however.

But it differs in that it also causes rapid kidney failure.

Research has suggested that camels are the likely source of the virus.