A new study published online September 23 in the Journal of the National Cancer Institute says that the Merkel cell polyomavirus (MCPyV) is the only human polyomavirus known to be associated with a rare skin cancer, known as Merkel cell carcinoma.

The majority of patients with Merkel cell carcinoma carry MCPyV, but little is known about the polyomavirus' prevalence in the general population and the association between circulating antibodies against MCPyV and the rare skin cancer.

Denise A. Galloway, Ph.D. and Paul Nghiem, M.D., Ph.D., of Fred Hutchinson Cancer Research Center in Seattle, and colleagues investigated the levels of antibodies against all five human polyomaviruses in plasma from 41 patients with Merkel cell carcinoma and 76 matched control subjects. Seroprevalence of polyomavirus-specific antibodies for McPyV and the other four polyomavirusesBK, JC, WU, and KIwas also determined in another 451 control subjects, who represented the general population. MCPyV DNA was determined in tumor tissue specimens.

Although infection with MCPyV is common in the general population, MCPyV, but not the other four human polyomaviruses, appears to be associated with Merkel cell carcinoma.

"It should be remembered that Merkel cell cancer is rare...," the authors write. "Thus, although antibody reactivity against MCPyV was associated with an increased risk of developing cell cancer, the absolute risk of cancer development in antibody-positive individuals is exceeding low." 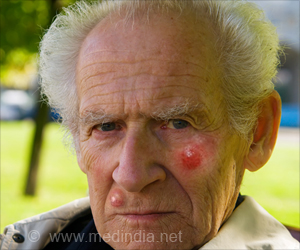