Many women report increased forgetfulness earlier in the aging process, as they transition to menopause, epidemiological surveys show.

Maintaining intact memory function with age is one of the greatest public health challenges of our time, and women have an increased risk for memory disorders relative to men later in life.


In the study published in the Journal Of Neuroscience, researchers conducted functional Magnetic Resonance Imaging (fMRI) study on 200 women aged 45-55 years to characterize the changes in memory circuitry that occur in early midlife, as a function of sex and women's reproductive stage.

Researchers then examined the impact of sex and reproductive stage on functional connectivity across brain regions associated with tasks.

Across women, lower 17β-estradiol concentrations were related to more pronounced alterations in hippocampal connectivity and poorer performance on a subsequent memory retrieval task, strongly implicating sex steroids in the regulation of this circuitry.

Together, these findings underscore the importance of considering reproductive stage, not simply chronological age, to identify neuronal and cognitive changes that unfold in the middle decades of life. In keeping with preclinical studies, these human findings suggest that the decline in ovarian estradiol production during menopause plays a significant role in shaping memory circuitry.

These findings suggest that early changes in memory circuitry are evident decades before the age range traditionally targeted by cognitive neuroscience of aging studies.

Menopause Symptoms Controlled By Dietary Changes
A new study has revealed that menopausal symptoms such as night sweats and hot flashes may be controlled with dietary changes.
READ MORE

Brain Changes After Menopause may Lead to Lack of Physical Activity Among Women
Activation of brain receptors in the brain's pleasure center may serve as a future treatment to improve motivation for physical activity in postmenopausal women.
READ MORE

Estradiol Helpful for Postmenopausal Women at Risk for Dementia
Hormone therapy with estradiol could prevent degeneration in the key regions of the brain of women who are at a risk of dementia, a new study found
READ MORE 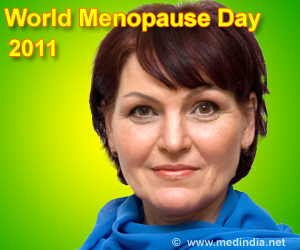