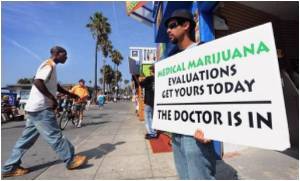 Pot-infused ice cream? A medical marijuana dispensary in California is offering visitors the high, in decadent flavors of new kinds of ice cream.

Creme de Canna on Soquel, LA, which is one of California's estimated 2,000 medicinal marijuana dispensaries, sells the half-pint tubs of ice cream.

Widespread concerns have been expressed over laws governing medical marijuana following a couple of violent incidents in Washington.
Advertisement

Its owner, Jonathan Kolodinski, said customers can choose from three flavours, the Banannabis Foster, Straw-Mari Cheesecake and Triple Chocolate Brownie, and he added that more flavours are coming up.


Kolodinski said he was offering the ice cream as a healthy alternative to patients who do not want to smoke medical marijuana.

"Everybody who's tried it has said they absolutely love it. A lot of people come back for seconds, thirds and fourths," the Daily Mail quoted him as saying.

The Californian Supreme Court has struck down as unconstitutional the state's limits on how much medical marijuana a patient can possess.
Advertisement
The cost for one tub is 15 dollars, and Kolodinski said that each contains two to four "doses" of cannabis, which is the equivalent of smoking eight joints.

He said that the store is very careful to warn patients of the contents of the ice cream tub, and that patients have to carry a card given to them by their doctor to buy the medicinal marijuana.

"We very explicitly label all our products with a marijuana leaf that says 'Keep out of reach of children'. We have been very mindful," he added.

Los Angeles city authorities passed an ordinance restricting the number of medical marijuana dispensaries, which have grown to almost 1,000
Advertisement

Draft legislation has been approved in California city Oakland moving it a step closer to legalizing the large-scale production of medical marijuana, a city council clerk said on Wednesday.
Advertisement