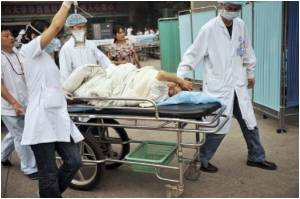 Especially for pregnant women and children, medical aid group Doctors of the World criticised the state of healthcare for the most vulnerable people in struggling European economies.

A survey of 16,881 people who had consulted Doctors of the World clinics in 25 cities across eight European countries in 2013 found that 64.5 percent of them had no health coverage, the survey report said.

Aid groups can offer help but it is up to governments to protect the most vulnerable people, it said.


"Yet some seem to forget this when faced with the pressure of short-term economic decisions and austerity measures," Doctors of the World said in a report presented in Madrid.

In a remote Myanmar village, Big Zaw has known he was different since a teenage growth spurt sent him soaring above his neighbors.
Advertisement
"Vulnerable people need more protection in these times of crisis, not less."

The survey included 285 pregnant women seen in the aid group's clinics in Europe in 2013, of whom 65.9 percent had no access to antenatal care. In 70 percent of the cases seen, doctors decided the women were in need of urgent or semi-urgent care, it said.

In the same period, the group's clinics saw 1,703 children. At best only half had been vaccinated against tetanus, hepatitis B, measles and whooping cough, the survey said.

"We want to reiterate the need for unconditional access to both antenatal care for pregnant women and to essential childhood vaccinations," the report said.

"This amounts to a denial of rights which goes against basic human rights, international conventions and respect for the fundamental principles for public health," it said.

The survey covered 16,881 patients who visited the group's clinics in Belgium, Britain, France, Germany, Greece, the Netherlands, Spain and Switzerland in 2013.

WHO, Italy Send 10 Tonnes of Medical Aid to DRCongo

Oral Health And AIDS
News Archive
News Resource
News Category
Death Caused by a Rare Type Amoeba: Research Study Japan Approves Smallpox Vaccine for Monkeypox Did Human Evolution Shrink Your Brain? What to Do When Your Asthma Medication Doesn't Work? Which is Better to Improve Smoker's Health  Cigarettes or E-Cigarettes?
More News
Sign up for Wellness Consult a Doctor Sign up for Selfcare

Turmeric Powder - Health Benefits, Uses & Side Effects Indian Medical Journals The Essence of Yoga Vent Forte (Theophylline) Diaphragmatic Hernia Calculate Ideal Weight for Infants Sanatogen Drug Side Effects Calculator Drug Interaction Checker Find a Doctor
This site uses cookies to deliver our services. By using our site, you acknowledge that you have read and understand our Cookie Policy, Privacy Policy, and our Terms of Use