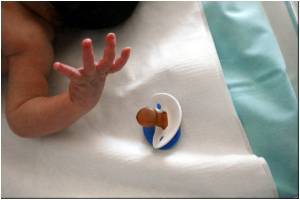 A new research study seems to indicate that measuring brain activity in infancy would help in identifying the potential risk of autism.

At present, specialists use only a checklist for behavioral signs and symptoms in their diagnosis. Often behavior patterns that they are watching out for become manifest only when the child becomes two years old. And experts feel that an earlier diagnosis would mean earlier treatment of the disorder.

Hence, to establish earlier predictive markers, researchers used electroencephalography, or an EEG, to measure the brain waves of nearly 80 babies from the time they were 6 months old until they reached age 2. They discovered that high risk babies, having an autistic sibling, showed a different brain pattern. There was abnormal activity in the front left side of the brain, which is involved in language and social development.  Lead study author William Bosl, a neuroinformatics researcher at Children's Hospital Boston, concludes that children with a elder sibling with autism are more likely to be autistic themselves.

"Infants begin paying attention to where others are looking and using early gestures to share information with others," Dawson said. "A lack of joint attention is one of the earliest signs of autism."

Encyclopedia section of medindia gives general info about Magnetic Resonance Imaging
Advertisement
Magnetic resonance imaging, or MRIs, and even magnetoencephalography, or MEGs, had been used earlier to study changes in brain waves. Now, it's the newer, artificial intelligence technology and sophisticated computer algorithms that enabled the researchers to look more deeply into what the EEGs show, and to identify early signs of autism.

"Artificial intelligence gives us the ability to find patterns we might not find with our own eyes," Bosl said. "One of the difficulties with a disorder like autism is that it's very heterogenous. A very high-functioning person with autism might not be so different from a so-called 'normal' person who is quirky. Defining the differences may be somewhat subtle."

But the problem with all these studies has been an inconsistency in follow-up results. In fact, the major shortcoming of the present study has been a failure on the part of the research team to track the infants to see if they actually did develop autism. Till the connection is conclusively established, EEGs should not be taken as a definite way to diagnose autism, feel experts.

As Catherine Lord, director of the University of Michigan Autism and Communication Disorder Center points out, this study only suggests what earlier ones had already done - brain activity is different among those who have a family history of autism. It has important implications, but is most certainly not a clinical finding, according to Lord.

The most amazing and complex organ in the entire universe, the human brain continues to remain an enigma.
Advertisement
<< Blood Vessel Lining Could Indicate Heart Disease Risk
Nanotechnology In Liver Cancer Treatment >>