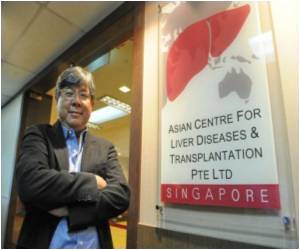 They evaluated the use of molecular-sized bubbles filled with C6-ceramide, called cerasomes, as an anti-cancer agent. Ceramide is a lipid molecule naturally present in the cell's plasma membrane and controls cell functions, including cell aging, or senescence.

Liver is the largest organ inside the human body. It performs 500 different functions and processes 720 liters of blood per day. The important functions of the liver, the development of liver cancer and it's symptoms are presented in this interactive.
Advertisement

Hepatocellular carcinoma is the fifth most common cancer in the world and is highly aggressive. The chance of surviving five years is less than five percent, and treatment is typically chemotherapy and surgical management including transplantation.


"The beauty of ceramide is that it is non-toxic to normal cells, putting them to sleep, while selectively killing cancer cells," said Mark Kester, Ph.D., G. Thomas Passananti Professor of Pharmacology.

How many of us know that the liver is a vital organ the size of an American Football? To understand more about the liver and its functions spend a few minutes taking part in this quiz.
Advertisement
Cerasomes, developed at Penn State College of Medicine, can target cancer cells very specifically and accurately, rather than affecting a larger area that includes healthy cells. The problem with ceramide is that as a lipid, it cannot be delivered effectively as a drug. To solve this limitation, the researchers use nanotechnology, creating the tiny cerasome, to turn the insoluble lipid into a soluble treatment.

"Cerasomes were designed as a therapeutic alternative to common chemotherapeutics," said Kester. "These have been shown to be toxic to cancer cells and not to normal cells, and have already been shown to effectively treat cellular and animal models of breast cancer and melanoma. Cerasomes have also been shown to be essentially free of toxic side effects normally associated with anticancer agents."

In the test tube and animal models of liver cancer, cerasomes, but not a placebo, selectively induced cell death in the cancer cells.

In mice with liver cancer, cerasomes blocked tumor vascularisation, the forming of blood vessels needed for growth and nutrition. Studies show that lack of nutrition causes cells to create more ceramide and leads to cell death.

"It is plausible that preventing liver tumor vascularization with cerasome treatment could induce widespread apoptosis, a genetically programmed series of events that leads to cell death in tumors," Kester said. "The efficacy of our cerasomes in the treatment of diverse cancers lends significant therapeutic promise as it translates from bench to bedside."

The researchers published their work in the journal Gut. A Penn State Dean's Feasibility Grant, Pennsylvania tobacco settlement funds, and the National Institutes of Health supported this work.

In an earlier study published in the journal Blood, researchers observed that cerasome use led to complete remission in aggressive, large granular lymphocytic leukemia in rats. In addition, the protein survivin, which prevents cell death, is heavily produced in NK-leukemia cells, but not in normal cells. Cerasome decreased expression of survivin and may lead to a therapeutic approach for fatal leukemia.

Penn State Research Foundation has committed to licensing patent-pending ceramide-based nanotechnologies to Keystone Nano, Inc. That company is currently working to complete the preclinical package for cerasomes in human studies in patients with liver cancer. Kester is a co-founder and chief medical officer of Keystone Nano, Inc.