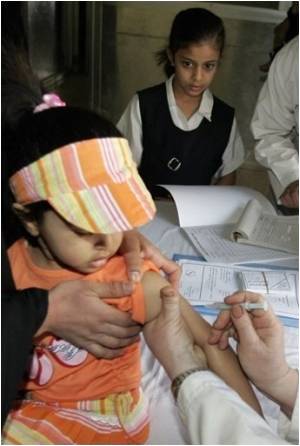 A vaccine campaign took a fatal turn at a government hospital in Kutch, Gujarat, when four infants died immediately after being vaccinated for measles, report officials.

On 'Mamta Day', organized by the district health department, children and pregnant women from a slum colony in Adipur, a town in Kutch, were vaccinated. Seven under-one year olds had been administered the vaccine, when four developed complications and were rushed to the hospital where they died.

Chief Minister of Gujarat, Narendra Modi has ordered an enquiry, while ordering the complete batch of vaccines to be withdrawn from the state. He has promised severe action against those responsible for this incident and has also announced a compensation of Rs1 lakh to the parents of the infants.


Meanwhile post mortem reports are being expected while samples of the vaccine have been collected by the foods and drugs control department and sent to the drugs laboratory in Kasauli in Himachal Pradesh for analysis to know why this tragedy happened.