Measles Break Out in Europe 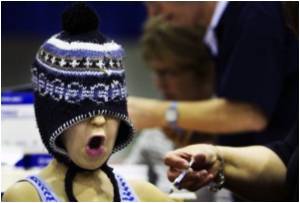 Europe is reeling under a spreading measles outbreak that has already attacked 6,500 people in 33 countries, as more people travel over Easter, carrying the infection with them.

The World Health Organization has urged Europe to take concerted action to control the epidemic. Although, the disease can be prevented by an effective vaccine, it proceeds to kill as many as 200,000 children per year.

Measles symptoms include fever, cough, spots on the cheeks and rashes. It is spread through close contact including coughing and sneezing and is especially serious in babies and people with weak immune systems. Complications affect one in every 15 children infected, including pneumonia, seizures and encephalitis.


Zsuzsanna Jakab, WHO regional director for Europe, said, "With shared borders and considerable population movement, countries share health threats. There is a need to create strong partnerships to prevent and control diseases, such as measles, in our region."
Advertisement
France has been most affected, with 4900 people having suffered measles. Some 400 cases have been registered in FYR Macedonia, 300 in Serbia, 131 in Bulgaria, 100 in Belgium and 80 in Turkey.

A campaign, Immunization Week in 180 countries and territories across the world will focus on 'educational materials on vaccines; programs for health workers; discussions between policymakers, health professionals and members of the community; and vaccination campaigns to protect vulnerable populations against diseases such as diphtheria, hepatitis B, influenza, measles, mumps, maternal and neonatal tetanus, polio, rubella, whooping cough and yellow fever.'

The WHO has warned countries as widely flung as Denmark, Bulgaria and Indonesia to carry out immunization programs.


Source: Medindia
Advertisement
<< Travelers Advised to Take Adequate Precautions Against Mala...
Germs Abound More On Your Car's Steering Wheel Than on the ... >>

Vaccinate Children Against Measles
Health Protection Scotland has advised parents to ensure that their children receive the MMR shot, ....