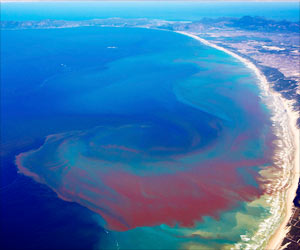 For very fast calculation of the wave behaviour, a research student has developed mathematical models for each water depth taking into account slopes, quay walls or ships.

Unlike other mathematical models, the models of Ruddy Kurnia, a doctoral student at the Netherlands' University of Twente, does not use approximation but the exact relationship to capture the complicated nature of waves.

The total phosphorus concentrations found in the glacial meltwater of the Leverett glacier is 10 times greater than concentrations found in Arctic river waters.
Advertisement
‘The deepest ocean waves with a long wave move at high speed, while the waves we see at the surface are short waves moving slower and differ from the deep sea waves.’

The waves we see at a surface, at full sea or at the coast, consist of numerous other waves at a range of depths. The deepest ocean waves with a long wave move at high speed, while the waves we see at the surface are short waves moving slower and differ from the deep sea waves in shape and altitude.


Rather than choosing a numerical approach that uses strongly simplified equations for a series of times, Kurnia wrote an accurate description of the combined action of the wave at different depths, using the kinetic energy, according to the University of Twente.

World's Lakes Are Warming Twice As Fast As The Oceans

The rapid warming of the lakes has put ecosystem at risk. The study found that lakes are warming an average of 0.61 degrees Fahrenheit each decade.
Advertisement
Kurnia was also able to introduce abrupt changes - a quay, a sloping coastline, and a ship. Despite the added complexity, the models calculated very fast - minutes instead of days.

The model calculations have already been compared with the many experiments in 'wave tanks' of the Technical University of Delft in the Netherlands and the Indonesion Hydrodynamic Laboratory. Kurnia's research had financial support of the Dutch Technology Foundation STW. His software has been named HAWASSI: Hamiltonian Wave-Ship-Structure Interaction.

Large-scale warming events at about 14,700, and again 11,500, years ago occurred rapidly and triggered loss of oxygen in the North Pacific.
Advertisement
<< Cost-friendly Blood Test To Detect Inherited Heart Risks
Alcohol in Moderation Good for Heart, Lowers Risk of Heart ... >>

The concurrence of cooling events on both land and sea suggests that a global cooling phenomenon was erased by subsequent global warming.

The Essence of Yoga Sinopril (2mg) (Lacidipine) Indian Medical Journals Drug Side Effects Calculator How to Reduce School Bag Weight - Simple Tips Find a Hospital Drug Interaction Checker Accident and Trauma Care Sanatogen A-Z Drug Brands in India
This site uses cookies to deliver our services. By using our site, you acknowledge that you have read and understand our Cookie Policy, Privacy Policy, and our Terms of Use