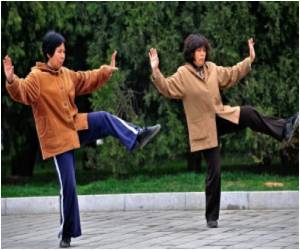 Daily calisthenics routine has been revived in Beijing, and Liu Tao is only one of the many workers who are expected by authorities to take part.

Suspended three years ago due to low interest, the mass calisthenics routines favoured by late Communist leader Mao Zedong have been reinstated in the Chinese capital under a new government health push.

Every week at the Working People's Cultural Palace, a park adjacent to the famed Forbidden City palace complex, instructors teach the moves that people are expected to perform to music broadcast twice a day on state radio.


"Young people snack a lot and sit in front of their computers all day. They don't want to exercise," said Liu, 28, a property manager whose employer assigned him to learn the routine so he could in turn teach his colleagues.

Simple and practically possible lifestyle changes can make a huge difference in improving our health status without actually putting much effort.
Advertisement
"So this type of activity is good for the body and the mind," he adds, before returning to a line of people performing the moves as their instructor calls out a beat of "One! Two! Three! Four!"

Launched in 1951 by Mao, group calisthenics evolved over the decades, combining traditional Chinese pursuits like kung fu with moves taken from more modern activities like aerobics and even bowling.

They were suspended in Beijing in the lead-up to the 2008 Olympics as officials focused on Games preparations and due to a lack of interest, according to state media reports.

But they've been brought back amid growing official concern over public health.

China's recent prosperity has led to its citizens living more sedentary lifestyles and eating larger quantities of richer food. Associated health threats such as diabetes and heart disease have been on the rise.

The Beijing Federation of Trade Unions wants the eight-minute routine to be mandatory for all state-owned companies in the capital by 2011, and for 60 percent of workers across the city to participate.

Authorities plan to train around 5,000 instructors to teach employees how to perform the routines.

Zhang Zhenying, 64, a fitness expert who teaches the exercises near the Forbidden City twice a week, hopes the routine will catch on with Beijingers.

"When they retire, before school, on holiday, travelling, they can do them, it's so beneficial -- you don't just have to do them in the office."

Some companies in Beijing had already established mandatory calisthenics even before authorities in the capital reinstated them.

Real estate agent Yao Xuesong exercises with his colleagues to the sound of Chinese rock music every morning at 8:30 on the pavement in front of his company's office.

More like a dance routine than a workout, Yao says the exercise helps relieve work stress.

"Every day when I finish this, I feel a bit better. Co-workers get along better too," he says.

Some of his colleagues, however, move less enthusiastically to the music than Yao, and some doubt whether the exercises will truly catch on in a modern era of long work hours and job pressures.

Aerobics is a physical exercise that includes activities like dance, cycling, running, stretching and many ...

Exercise is a need to eat better and perform better. Nourishing the body with wholesome food will make it ...