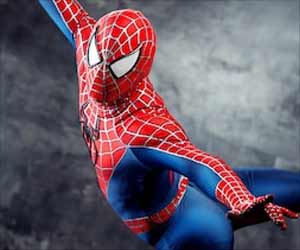 As the Marvel Avenger Endgame hits the movie theaters this week, a new research team reveals that viewing a seven-second scene from Spider-Man or Ant-Man movie reduces symptoms of insect phobias. The findings of the study are published in the journal Frontiers in Psychiatry.

Exposure therapy for specific phobias (e.g., of ants and spiders) utilizes neutral exposure to a phobic stimulus to counteract an irrational fear. As one is increasingly exposed to the phobic stimuli, one ceases to fear it. To date, the effect of positive exposure, albeit fantasy (e.g., in the form of Marvel movies), has not been attempted in cognitive behavioral therapies.

Advertisement
‘Marvel's movie catalog may help people overcome their fears. A seven-second clip of Marvels Spider-Man or Ant-Man movies could help decrease phobia symptoms in those afraid of the bugs by 20 percent.’
Read More..

Prof. Menachem Ben-Ezra from the School of Social Work at Ariel University together with Dr. Yaakov Hoffman, of the Interdisciplinary Department of Social Sciences at Bar-Ilan University, exposed 424 subjects to Spiderman and Antman movie excerpts to see if spider and ant phobic symptoms would decrease.


Screening a seven-second excerpt of a spider scene from Spiderman 2 reduced participants' post-viewing spider phobia (arachnophobia) symptoms score relative to their pre-viewing score by 20%. This impressive cost-benefit efficacy was similarly obtained for ant phobia (myrmecophobia) when viewing a seven-second excerpt from Antman.
Advertisement
However, when participants were queried either about general insect phobia both pre- and post-viewing a seven-second Marvel opening scene (common to all Marvel movies) or a seven-second natural scene - there were no significant symptom reductions for insect phobia. This suggests that it was neither the calm (natural scene), nor the fun/fantasy associated with viewing a Marvel superhero movie, that was solely driving effects, but rather the specific exposure to ants and spiders in the context of a Marvel movie.

Thus, exposure to Marvel's "good ole Spidey" may be an optimal solution. Such an intervention may also destigmatize therapy, especially in resistant cases, and encourage homework completion, often an integral part of cognitive behavioral therapy. Ways of maximizing these effects, along with the challenge of applying such interventions with other phobias, are being considered by the authors.

Aside from the scientific (potent new form of exposure) and clinical (potential efficacy of such exposure) implications, this article is timely in light of the many Marvel relevant movies of 2019 (Captain Marvel March 2019, Avengers Endgame April 2019, and Spiderman II in July 2019).

Prof. Ben-Ezra and Dr. Hoffman, both psychologists as well as avid Marvel superhero fans, point out that superhero movies may have many beneficial psychological attributes. Such movies not only help people feel better about themselves, but they also provide a contra to hectic and stressful lives by showing us the true underlying spirit of one confronting his/her fears. The researchers say such movies may be beneficial also for persons suffering from the aftermath of trauma. In the next stage of their research, the authors will examine other benefits of Marvel movie viewing vis-à-vis post-traumatic stress disorder.

Immersive Virtual Reality Therapy Can Drive Away Fears, Phobias in Kids With Autism
Immersive virtual reality therapy offers lasting effect in the treatment of fears and phobias in ......

Watching Others Beat Their Fears may Prevent Phobias Later
A new study has revealed that watching another person interact safely with a supposedly harmful ......

Phobias Associated With Unconscious Conflict
There is a causal link between unconscious conflict, and the conscious symptoms experienced by ......