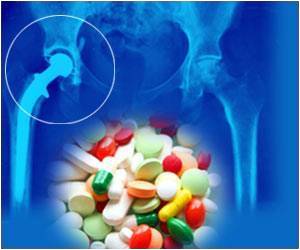 Women who take certain indigestion drugs (proton pump inhibitors, PPIs) are 35% more likely of suffering hip fractures; and smokers or those with a history of smoking are at a 50% increased risk, according to a new study by researchers at the Harvard Medical School and Massachusetts General Hospital in Boston.

When researchers studied the long term effects of PPIs they found that women who had taken them at least thrice or four times a week over a 2-year period were 35% more at risk of suffering hip fractures.

Acid-reducing Medicines may Lead to Dependency

Treatment with PPIs for eight weeks induces acid-related symptoms like heartburn, acid regurgitation and dyspepsia once treatment is withdrawn in healthy individuals.
Advertisement

Researchers feel that PPIs may reduce the take-up of calcium, which is an essential component of healthy bones. They also believe that these drugs might hamper the body's ability to break down and replace old bone tissue.


However, lead researcher Dr. Hamid Khalili said, "Even though the drugs increased the risk of fractures it was still very low. For every 500 patients on the drugs only one would be likely to fracture their hip in a year. Middle-aged women, particularly those who smoke, who had been taking PPIs for a long time should consider whether it was really necessary."

Thus the study suggests the importance of careful evaluation and the need for long-term, continuous use of PPIs, particularly among individuals with a history of smoking.

The common trend is to grab a bite on the run  make some time to eat well, so the running is more ...

Patella fracture is a kneecap injury that needs surgical correction. Undisplaced fracture can be healed by ...

Are you experiencing pain due to damaged hips? Travel abroad to get replacement surgery at affordable ...

Indigestion or dyspepsia is referred to nonspecific symptoms or discomfort that causes persistent pain or ...

Injuries are common in the sporting world. They can be minor like bruises and cuts, serious like fractures ...

Wonder Herbs for those Digestion Blues