London Olympics 1948: A Blast From The Past

The razzmatazz of the London 2012 Olympics is a world away from the last Games held in London in 1948. The year 1948 was a time when athletes had to survive on rations, stitch their own kit and wash it themselves.

Some of Britain's competitors from the first Olympics after World War II have watched the 2012 extravaganza thinking how it is all so different from the "Austerity Games" they experienced.

"We had to wash our t-shirt between games. It was a different planet," recalls 85-year-old grandfather Lionel Price.


Despite standing just 1.55m (5ft 1ins) tall, he played for Britain in the 1948 basketball competition.

The smallest player in the 2012 Great Britain squad is 1.89m, while the four tallest are all a towering 2.10m.

"These days, I would be up to the kneecaps!", he said with a chuckle.

"We were amateurs," Price told AFP, sitting on a sofa at his garden flat in Hampstead, north London and looking in good shape for an octogenarian.

He recalled: "We just had a manager who organised things. It was hit and miss. Today, they have a coach, some doctors, some dieticians.

"I was training to be an accountant. I used to go the office until 5:30pm, go home for a bite to eat and then go to the gym for a practice. That was it," said Price.

While Price actually did some training, Britain's 1948 field hockey team, hastily put together for the Games, made do with just a weekend's workout, said team member John Peake.

Despite that, "we were all very fit", he insisted.

The team was good enough to win a medal, taking the silver after a 4-0 defeat in the final against India.

The 87-year-old, who still stands ramrod straight, keeps his medal in a safe, although it is slowly disintegrating.

"Little bits of it have gone a little bit funny. I am not quite sure how deep the silver is. I think it was probably what they call a veneer," he said.

London in 1948 was a city recovering from the severe damage inflicted by the "blitzkreig" Nazi German bombardment.

"I remember the camaraderie. We did crosswords and puzzles," said basketball veteran Price. It was all a long way from the modern apartments, hair salons, and video games rooms in the Athletes' Village of London 2012.

In 1948, food in Britain was still rationed. The country's Olympic competitors "were allowed to have extra special rations, that were normally supplied to people who had heavy working jobs", hockey player Peake recalled.

The Americans shipped them some extra supplies while the French brought their own red wine.

Though he was serving in the Royal Navy, Peake was allowed two weeks' leave to participate in the 1948 Games. But not all the competitors were so lucky.

Jack Braughton, who competed in the 5,000m, "went there for a race and went home: I had to go to work.

"It was a sport in my day; nowadays it's a business," said Braughton, who is now in frail health.

Price said: "Now, they are sponsored by various organisations, they have rooms for clothes and towels. We did not have that in those days."

Edna Child, who was selected to represent Britain in the diving in '48, had to make her own swimming costume.

"I used to get some old ones and take the best and cut them down," she said.

Price, meanwhile, was given a single t-shirt in the British colours; red cotton shorts; a floppy hat; and a heavy blazer ill-suited to the sweltering conditions at the opening ceremony.

With the Games returning to London 64 years later, several athletes from the 1948 Olympics took part in the torch relay to honour their contribution.

"I was able to trot for some of the way and walk for the remainder," said Peake, who declined the offer of a wheelchair.

Britain's basketball team won only one match at the '48 Games. But it matters little to Price.

At Wembley, the main stadium for the Games, "there was a big sign: the important thing in the Olympics is not winning but taking part. It's been my philosophy," he said. 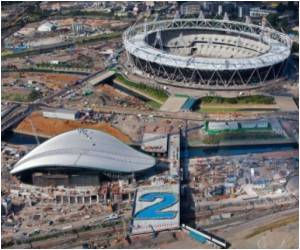 Scenic Cable Car Ride Over the Thames Planned For London 2012 Olympics
London is to get a cable car across the River Thames to link two 2012 Olympic venues, the city's transport authority said Monday, with construction to begin within the next few months.
READ MORE