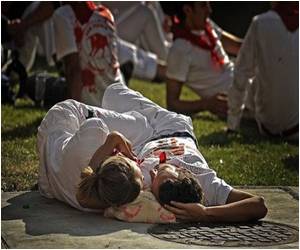 "Insomnia is a frequent complaint among survivors of critical illness," said Dr. Elizabeth Parsons, MD, MSc, of the Division of Pulmonary & Critical Care Medicine at the University of Washington in Seattle. "We examined a small cohort of survivors of acute respiratory failure to understand modifiable contributors to insomnia, including sleep apnea."

The study involved 21 patients with acute respiratory failure, defined as an acute need for at least 48 hours of mechanical ventilation. Assessment included the Insomnia Severity Index and in-home level II overnight polysomnography three months after hospital discharge. Sleep-disordered breathing was assessed with the Apnea Hypopnea Index (AHI) and the Respiratory Distress Index (RDI). The AHI measures the average number of apneas (breathing cessations) and hypopneas (partial obstructions) per hour. The Respiratory Distress Index (RDI) measures the average number of respiratory disturbances per hour (apneas, hypopneas, and milder events called respiratory effort-related arousals). An RDI of 15 or greater was considered clinically relevant to sleep quality and daytime function. An AHI of 15 or greater may be a risk factor for cardiovascular morbidity.


Among the 14 patients who underwent polysomnography, the majority met criteria for clinically-relevant sleep apnea, with 13 having an RDI of 15 or greater and 10 having an AHI of 15 or greater. Mean RDI was 38 and mean AHI was 29. Oxygen desaturations were generally mild, with an average 3% oxygen desaturation index of 8 (number of times per hour that oxygen level drops by 3 percent or more). Insomnia severity did not significantly correlate with the presence of sleep-disordered breathing.
Advertisement
"The incidence and severity of sleep apnea we observed among survivors of acute respiratory failure, if replicated in larger studies, are cause for concern," said Dr. Parsons. "Some patients had clinically significant sleep apnea despite lack of sleep complaints. Evaluating and treating sleep apnea may significantly impact the health and well-being of these patients."

"It is important to note that trauma was the inciting event for acute respiratory failure in 57% of our tested subjects. By subject report, 29% were actively taking an opiate pain medication at the time of testing. Opiates can worsen sleep apnea by reducing upper airway tone and central respiratory drive. Our results suggest that sleep apnea is common after acute respiratory failure, with central-acting medications serving as one potential contributor."

US Approves New Implant to Ward Off Sleep Apnea
US regulators have approved a first-of-its-kind implant that can help ward off moderate to severe .....