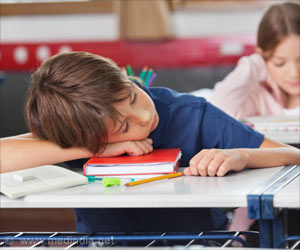 Effectiveness of an intervention other than cognitive behavioral therapy (CBT) also known as 'talking therapy' for patients with chronic fatigue syndrome.

Chronic fatigue syndrome or myalgic encephalomyelitis (CFS/ME) is relatively common. Children are disabled by fatigue and other symptoms such as headaches, muscle and joint pain and problems concentrating. Children have a poor quality of life but its causes remain unclear.

One in 100 children misses at least a day of class a week because of the disease and may lead to mental health problems due to lack of socialization.
Advertisement
‘The effectiveness and cost-effectiveness of the Lightning Process in addition to specialist medical care, compared with specialist care alone, for children with CFS/ME.’

The Lightning Process (LP) is a three-day training programme that draws on concepts from osteopathy, life coaching and neurolinguistic programming (links between brain processes, language and behavioral patterns). It teaches children to use the brain to improve their health.


More than 250 children use the Lightning Process for their CFS/ME each year in the UK (at an average cost of £620), but there are no reported studies investigating its effectiveness, cost-effectiveness or side effects. The LP is not available in the National Health Service (NHS).

Inflammation is a powerful driver of this mysterious condition, whose underpinnings have eluded researchers for 35 years.
Advertisement
So a research team, led by Professor Esther Crawley at the University of Bristol, set out to investigate the effectiveness and cost-effectiveness of the Lightning Process in addition to specialist medical care, compared with specialist care alone, for children with CFS/ME.

Data from 81 children were analysed at 6 months. Physical function was measured using a recognised questionnaire called the SF-36-physical function subscale. Data on pain, anxiety, depression, school attendance and cost-effectiveness from a health service perspective were collected at 3, 6 and 12 months.

Participants in both treatment groups improved. However, at 6 months, children who received the LP in addition to specialist medical care, had better physical function and less fatigue and anxiety. At 12 months, children in the SMC+LP group had less fatigue, anxiety, and depression and increased school attendance.

SMC+LP was probably more cost-effective than SMC alone (a difference in average net cost at 12 months of £1,474)..

The authors outline some study limitations, the most important of which are that they have not shown that the LP is effective on its own but only in addition to specialist medical care. They also point out that we do not know if the LP is effective for younger children. However, strengths include the randomised design and that patients were followed up for 12 months.

"The main difference between LP and CBT appears to be the emphasis placed on physiological responses and causal attributions," explain the authors. "But we do not know whether these explain the greater effectiveness of LP."

A Characteristic Chemical Signature For Chronic Fatigue Syndrome Has Been Identified

CFS kicks in when environmental stresses trigger a slow-down in metabolism and causes long-term pain and disability.
Advertisement
<< Broccoli Sprouts Retain Nutrients After High Pressure Treatm...
Self-Control May Not Diminish Throughout the Day >>

Symptoms of chronic fatigue syndrome can be provoked by imposing a mild to moderate strain to the muscles and nerves.