'Love and love only' is the moving spirit behind Valentine's Daya day that has plenty of good vibes, love and the heady scent of roses floating in the air that permeates most parts of the "free" world. Whether it is cooing couples on a date or friends who celebrate a bonding that "outlasts romances", February 14 is a day that catches popular imagination and enthuses young and old alike onto a loving exchange of greetings, gifts, hugs and kisses.

A young and daring priest who secretly blessed the union of loving couples in defiance of Emperor Claudius' unjust order forbidding marriage for soldiers in his army, is widely credited with the origin of Valentine's day. Though it was originally the Church that earmarked February 14 to commemorate his martyrdom for the sake of love, Valentine's Day has acquired through the centuries, a secular and global flavor. For those who are not in a relationship or believe Valentine's Day is not necessarily focused on romantic love, this is the day to show friends what they mean to you.

Across the world, trade picks up in the days leading to Valentine's Day, with almost everything on sale with a Valentine tagfrom heart- shaped diamond pendants to heart-shaped pizzas. Be it exclusive restaurants offering aphrodisiac food items on a platter or pubs and discotheques assuring food, drinks and non stop partying, roaring business is guaranteed across the world on Valentine's Day. Recession may render Valentine gifts less expensive this year but die hard romantics are vowing to make good the deficit by an upsurge of love.

In India Valentine's day is largely an urban celebration. Many middle class parents believe that their children's Valentine shopping and gifting is more about peer pressure than choice. It is also a disturbing fact that more and more youngsters are experimenting with alcohol, drugs and sex and Valentine's Day could be used as an excuse for indulgence.

Concurrently, there are those who think it is about time that people in the land that gave the world the treatise of LoveKamasutra and the enduring tribute to lovethe Taj Mahal, demystified the sublime emotion and openly celebrated living and loving. Parents, teachers and elders need to openly discuss the consequences of risky social and sexual behaviors with youngsters, rather than shoving the clichéd "Indian culture" lecture down their throat.

Just as young men and women in India are gearing up for a Valentine day bash, Ram Sene and similar self-appointed guardians of Indian culture and values are getting ready for the day tooto do the bashing. Pramod Muthalik, chief of Ram Sene, a radical group that dictates female conduct, perpetrates the gender divide and discourages inter-faith relationships, announced the Sene's agenda for the daystrong protests against Valentine day celebrations to preserve Indian culture and custom. If that means dragging girls out of pubs and beating them up, as was witnessed in the recent Mangalore pub violence, what culture are we talking about?

"If people celebrate the day despite our warning, then we will attack them," said Gangadhar Kulkarni, a senior Sri Ram Sene activist in an interview to a leading Indian newspaper. The right wing moral police have a record of indulging in vandalism of the worst kind. Anti-Valentine's day protest is just an excuse to indoctrinate young Indian men into parochial thinking.

A radical few who eye the vote bank alone cannot give the final word on an ongoing debate in India involving culture, morality and gender. Protests by radical groups to denounce Valentine's Day celebration as a Western influence that pollutes Indian culture and value system will only aggravate the youth and prod them on to risky behavior as an act of defiance.

Young, rebellious and loving it

With love as a leveling factor Valentine's Day can relegate caste, religion and such divisive forces to the back seat. The day of love and bonding will always see a proliferation of greetings and gifts among loved ones. There will be friends calling up to chat, spouses renewing declarations of love and young couples exchanging sweet nothings. But this year the Sri Ram Sena may have thrown a spanner in the works, because young men and women will be walking hand in hand on the beach or sharing drinks in a pubyet furtively glancing over their shoulders dreading the moral policing.

Valentine's Day 2009 will be remembered for the suspense it holdswhether urban Indian youth are going to "behave" according to the dictates of the Rama Sene, or going to prove that they are indeed young and rebellious and loving every minute of it!

A Recipe For Love
In the presence of a potential mate our bodies indulge in an involuntary pantomime, a phenomenon as old as the human race.
READ MORE

Love Hormone and Falling in Love
Why do we fall in love? Is love instinctive? Can we pin this life-altering emotion to a play of chemicals and hormones in the body? Discover what makes for the inextricable bonding of love and life.
READ MORE 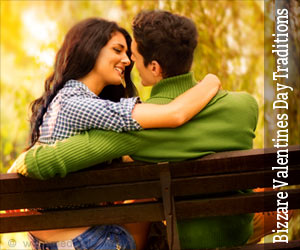 Bizarre Traditions Followed on Valentine's Day Across the World
Bizarre valentine''s day celebration from around the world, more than a bunch of red roses.
READ MORE