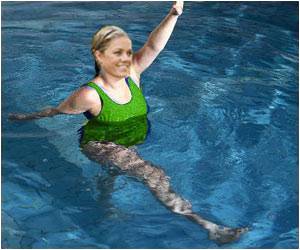 Healthy lifestyle choices may decrease cardiovascular Issues In women who have had gestational diabetes during pregnancy found a new study published In JAMA: Internal Medicine journal.

The researchers analyzed data from the Nurses' Health Study II, following health habits and medical history of more than 90,000 women from before pregnancy through middle age and the early senior years.

Advertisement
‘women who have had failed to adopt a healthy lifestyle in the wake of gestational diabetes had a 43-percent-higher risk for cardiovascular disease, particularly heart attack and stroke.’

The study confirms the links between gestational diabetes and cardiovascular disease found by other studies.


It also provides some of the strongest evidence to date that cardiovascular disease after gestational diabetes isn't inevitable for women who adopt a healthy diet, maintain a healthy weight, exercise moderately and do not smoke. .
Advertisement
The study was led by Cuilin Zhang, M.D., Ph.D., of the Division of Intramural Population Health Research at NIH's Eunice Kennedy Shriver National Institute of Child Health and Human Development, and colleagues. It appears in the latest issue of JAMA Internal Medicine. .

Gestational diabetes is a type of diabetes, or high blood sugar, that occurs only during pregnancy. Although it often disappears after birth, many women who had the condition later develop type 2 diabetes, usually by middle age. .

Some studies have shown women who had gestational diabetes are also at risk for cardiovascular disease, such as high blood pressure, high blood cholesterol, hardening of the arteries, heart attack and stroke. .

In the current study, the researchers found that women who failed to adopt a healthy lifestyle in the wake of gestational diabetes had a 43-percent-higher risk for cardiovascular disease, particularly heart attack and stroke.

Source: Eurekalert
Advertisement
<< Finding Treatments to Help Patients With Alzheimer's Disease
Beware of Stress: It Could be as Unhealthy as Junk Food >>

Healthy Diet and Normal Weight can Lower Risk of Gestational Diabetes
In South Asian women, pre-pregnancy weight and a low-quality diet increased the risk of gestational ...

Do Hotter Climates Increase the Risk of Gestational Diabetes In Women?
Women who are exposed to cold climate during pregnancy had a lower risk of developing gestational .....