Life as an Afghan Woman - a Living Death 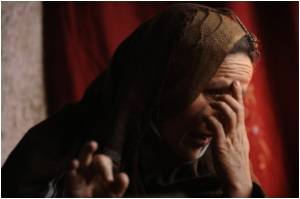 Shabnam's living death began when she was given away by her father as a repayment of a debt to become a 13 year old bride of a man in his late fifties who beat her mercilessly from the beginning.

Shabnam thinks she is about 17 now. She has a plump, heart-shaped face and Cupid's-bow lips. Her hair is covered with a black scarf and she wears a maroon coat-dress with diamante patterns on the collar.

"My father was a very cruel man," she said, sitting in the basement of one of Afghanistan's few shelters for abused and distressed women.


"He beat me and my siblings for as long as I could remember.

"My mother died when I was 11, and when I was 13 my father gave me to a man who was about 50 as repayment of a debt," she said, speaking quietly, her eyes lowered.
Advertisement
The man who owned her -- whose first wife had died without having children -- beat her, she said, "for any reason he could find".

"He locked me indoors, stopped me visiting my family. He was jealous if he saw me talking to male relatives, like cousins I had grown up with," she said.

"Twice I ran away and went back but he kept beating me," she said, bowing her head and turning now and then to the shelter's manager, who squeezed her hand to encourage her to carry on with her story.

She spent some time at the home of her sister and brother-in-law, she said, until they could no longer afford to keep her.

So she made her way to the Blue Mosque, the turquoise monument at the heart of Mazar-I-Sharif, revered as the tomb of Ali, son-in-law and successor of the prophet Mohammad who established the Shia sect of Islam.

There, she was referred to the shelter and "with the help of the people here, we went to court to get a legal separation, but my husband has disappeared without completing all the documents.

"I am utterly alone. I have been here for eight months and I don't know what will happen to me," Shabnam said.

Despite the despair in her voice and the obvious emotional trauma she is struggling to cope with, Shabnam would be considered lucky by many women in Afghanistan.

She has found a refuge where she is safe from the physical and mental abuse millions of Afghan women endure, simply because they were born female.

The shelter offers counselling and legal advice to ensure her constitutional rights are respected. She can stay as long as she wants.

Few women make it this far.

While the constitution that followed the fall of the Taliban in 2001 guarantees them such rights as education and employment outside the home, the spread of the insurgency has fostered a fear of a return to brutality.

The Taliban's five-year rule was marked by general repression that was particularly brutal to women. Girls were not permitted to go to school -- and even now are sometimes attacked and their schools destroyed by extremists.

Women were not allowed out unless accompanied by a male relative and wearing a burqa. They were attacked in the street for such perceived crimes as wearing white shoes and rape victims were publicly executed as adulterers.

Even today, women who become politically active often face death threats and some have been murdered or forced into exile.

After nine years of insurgency, and with Taliban violence spreading to the once peaceful north, President Hamid Karzai has proposed negotiating with the insurgent leadership.

Women say they fear their constitutional rights could be eroded by any so-called peace deal, and in Mazar are retreating behind their burqas so as not to offend any extremists in their midst.

In reality, however, despite their constitutional rights, women continue to be treated as chattels and slaves in the name of religion and tradition.

Anecdotal examples abound of young women betrothed as toddlers, exchanged for fighting dogs or to pay debts, beaten and raped by their husbands, jailed by their families for refusing arranged marriages, murdered for the family's "honour," becoming mothers as soon as their bodies are ready, barred from leaving their homes.

"The worst thing is to be an Afghan woman," said Endy Hagen, a German consultant who works with the Mazar-I-Sharif shelter, which houses about 25 women, most aged between 18 and 24 years old.

"It is mostly younger women who run away from their homes because they still have the strength to run," Hagan said.

"Older women have children or feel more tied to their situation."

Women's shelters are a post-Taliban phenomenon, and as such are often regarded with suspicion, accused of operating brothels or running trafficking rackets, she said.

To avoid such accusations, the safe house in Mazar takes only women who are referred through the courts or other official routes, she said, adding: "It is still a very sensitive field because the violence against women is very often not seen as violence.

"When the women first come to the safe house, many of them feel very bad because they are living outside the family structure. In Afghan society the connection with family is so strong that they cannot imagine living away from the family," she said.

"Running away is seen as a sign of guilt, of adultery. Many women who run away, when they are picked up by the police, are sent straight to prison," Hagan said.

Gul Andam, a Pashtun woman of 24 with a distinctive nomadic tattoo between her waxed eyebrows, spent a year in prison, accused of 'zina', the crime of having sex outside marriage.

Her brothers sent her to prison, she said, after she had a religious wedding ceremony with the man she loved and refused to marry a man they had chosen for her.

Both she and her husband, an ethnic Hazara, were sentenced to two years in prison after her brothers convinced a court they were not legally married, she said.

When she was released after serving half the sentence, her brothers continued to insist that she marry the man they had chosen for her.

"They told me that if I did not marry that man, they would kill me," she said.

With legal help she found the shelter and after three years is now its longest-serving resident, doyen to the younger women who pass through.

Even after all this time, her brothers still harass her, she said, but her Hazara husband, also now out of prison, has not given up.

He calls sometimes to tell her what progress he is making to prove their marriage is legal, she said.

"I don't know what the future holds for me. What can a woman do?"

Domestically Violent Males Think It to be a Common Occurrence
Men who engaged in domestic violence consistently overestimated how common such behavior is, and ......

Taliban Revival Troubles Women in Northern Afghanistan
Amid fears they are being stalked by a resurgent Taliban determined to trample their rights, women ....