Following the World Health Organization's warning that Liberia could see an exponential increase in new cases of Ebola infection, the West African nation is preparing itself for the worst over the next few weeks.

While the WHO predicted an "exponential increase" in infections across West Africa, it warned that Liberia, which has reaped the lion's share of misery with half of all fatalities, could initially only hope to slow contagion, not stop it.

The UN's health arm upped the Ebola death toll Tuesday in Liberia, Sierra Leone, Guinea and Nigeria to 2,288 out of 4,269 cases, noting nearly half of all infections had occurred in the past 21 days.


The WHO also evacuated its second infected medical expert, a doctor had been working at an Ebola treatment centre in Sierra Leone.

Emory University Hospital in Georgia on Tuesday admitted an American who had contracted Ebola in West Africa, but the hospital has declined to confirm it was the WHO employee.

Ebola, transmitted through bodily fluids, leads to haemorrhagic fever and -- in over half of cases -- death. There is no specific treatment regime and no licensed vaccine.

The fresh WHO figures underscore Ebola's asymmetric spread, as it rips through densely populated communities with decrepit public health facilities.

Speaking Tuesday, WHO's epidemiology chief Sylvie Briand said that the goal in Senegal and Nigeria was now "to stop transmission completely". Senegal has announced only one infection, while Nigeria has recorded 19 infections and eight deaths.

The Democratic Republic of Congo is battling a separate outbreak which has killed 32 in a remote northwestern region, according to figures from Saturday.

"But in other locations, like Monrovia, where we have really wide community transmission, we are aiming at two-step strategies," Briand told a briefing in Geneva, "first, to reduce the transmission as much as possible and, when it becomes controllable, we will also try to stop it completely.

"But at this point in time we need to be pragmatic and try to reduce it in the initial steps."

A day earlier the WHO had warned that aid organisations trying to help Liberia to respond would "need to prepare to scale up their current efforts by three- to four-fold".

Before this year's outbreak, it noted, Liberia only had one doctor to treat every 100,000 patients in a total population of 4.4 million people.

In Montserrado county containing Monrovia, there are no spare beds at the few Ebola treatment sites operating, the WHO said, describing infectious people being driven to centres, only to return home to create "flare-ups" of deadly fever in their village.

One thousand beds are needed -- far more than the 240 currently up and 260 more planned, it said.

"It's a war against this virus ? I still have hope we can win this war," the WHO's Briand said.

On Monday the 17,000 residents of Liberia's Dolo Town, 75 kilometres (47 miles) from Monrovia, were freed from a lockdown imposed more than two weeks ago.

The quarantine including a night-time curfew had been set up amidst a surge in Ebola infections, at the same time as West Point, a slum in the capital.

But other countries have stepped up limits on the movement of people travelling from West Africa. China, one of the region's main investors, on Tuesday announced it was reinforcing checks on people, goods and vehicles, as well as mail, arriving from affected countries.

In Gambia, customs officials said they had closed the borders to Guineans, Liberians, Nigerians and Sierra Leoneans -- though not to neighbouring Senegal.

Italy announced a first possible case of Ebola -- a woman who had recently returned from Nigeria.

And the United States offered $10 million to pay for medical workers and equipment as part of an African Union deployment to battle the outbreak.

US Confirms $10 Million Aid for West Africa to Combat Ebola
The United States government has confirmed that it will be contributing around $10 million.
READ MORE

Health Authorities Investigating First Case of Suspected Ebola Infection in Italy
Italian health authorities are investigating what could be the first case of Ebola infection in the country.
READ MORE 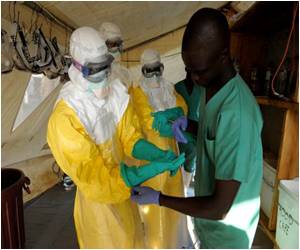 Major Scale-Up to Ebola Crisis Called for by The US
The world must respond with a major scale-up for the Ebola crisis in West Africa, and should include military flights for delivering supplies, US lawmakers and leading doctors said Thursday.
READ MORE