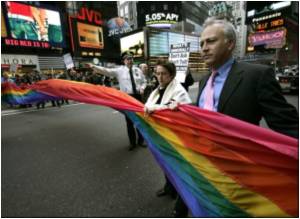 Croatia's government Thursday presented a draft law on registered gay partnership that will give homosexual couples the same rights as heterosexual couples, apart from child adoption.

The proposal comes just days after almost 66 percent of Croatians voted in a referendum to outlaw gay marriage by amending the constitution to limit the definition of marriage as a "union of a man and a woman."

The parliament began debating this and other constitutional changes on Thursday and Croatian President Ivo Josipovic has demanded an amendment aimed to protect same-sex partnerships.
Advertisement
With such an amendment in place, the state would be obliged to "ensure protection of unions that are not marriage the right to family life," Josipovic was quoted as saying.

"Such an amendment will introduce a balance and eliminate a feeling of inequality" among gay couples because of the new definition of marriage, Josipovic said.

The government's draft -- to be submitted for a parliamentary vote in the coming weeks -- stipulates social and health insurance rights, as well as inheritance rights available to heterosexual partners.

It is expected it would be easily approved as the ruling centre-left authorities have a stable majority.

Although adoption of children remains forbidden for same-sex couples, the draft stipulates the possibility for legal parental recognition if partners had children before registering.

In 2003, Croatia adopted a law recognising same-sex couples who have lived together for at least three years, although apart from official acknowledgement, the measure grants them few rights.

Croatia, which joined the European Union in July, is a conservative society strongly influenced by the Catholic Church. Almost 90 percent of Croatians are Roman Catholics.

Attitudes towards gay rights have slowly become more liberal in Croatia since it hosted its first Gay Pride parade in Zagreb in 2002. Dozens of participants were beaten up by extremists at the time.

But gay rights marches are now staged regularly, though still under heavy security.