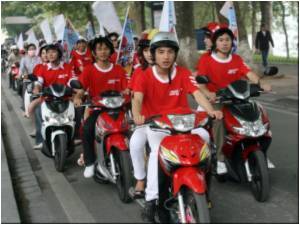 Any law to make the wearing of cycle helmets mandatory in the UK should apply only to children, because the evidence that cycle helmets significantly protect adults against serious head injury is equivocal, conclude researchers in the Journal of Medical Ethics.

And it's a matter of principle that people should be allowed to take risks with their health, if they choose to do so, they argue.

Attempts to make the wearing of cycle helmets compulsory in 1998/9 and 2003/4 both failed, possibly because the doctors' union, the British Medical Association (BMA), refused to support such legislation, suggest the authors from St George's, University of London and the London Deanery.


But in 2010 the BMA changed its mind, and the Northern Ireland Assembly has recently voted in favour of a bill to make cycle helmets compulsory, prompting the authors to conclude that similar legislation in Britain is just around the corner.
Advertisement
They agree that legislation for children may be warranted: the evidence in favour of the protection afforded by cycle helmets in this age group "is strong," and younger children may not be mature enough to make such decisions for themselves, they say.

But the evidence for adults is "not as clear cut as many advocates of cycle helmet legislation seem to think," they write.

They point to Australian research showing that most (80%) cyclists killed or seriously injured were wearing helmets at the time of the incident. And the overall risk is small, irrespective of whether a helmet is worn, say the authors.

"There were 17064 reported cycling casualties in 2008 in the UK, yet the number of fatalities(104) and the number of serious injuries (2606) were not largeespecially when one considers the number of 'road miles' covered by cyclists in the UK every year," they write.

This compares with over 35,000 deaths from lung cancer alone in 2008"a figure that dwarfs the deaths from cycling," they emphasise.

They argue that cycle helmets do not provide the same level of protection as motor bike helmets, which recent research shows cut the risk of head injury by 69% and that of death by 42%.

However, motorcycle helmets are made of heavier material than cycle helmets, so are not a viable option for cyclists, they say.And while helmets work well for those who fall off their bike, it is less clear whether they provide much protection against the many cycling injuries sustained during a collision with another vehicle.

While the evidence from countries where cycle helmets are mandatory indicates a fall in head injuries, other evidence suggests this might be because helmet legislation deters people from cycling.

Quite apart from anything else, a law mandating the wearing of cycle helmets is "paternalistic," argue the authors. While that may be appropriate for children, for competent adults, "this must give us significant pause," they contend.

Instead of legislation, governments should continue to provide public health information to their citizens about the potential benefits of wearing cycle helmets and leave it up to them to decide for themselves, say the authors.

"If competent adults wish to cycle with their hair (or their shiny pates) exposed to the wind, rain, and sky, then they ought to be able to do so without interference from the government or anyone else," they conclude.

Helmet Fit Vital to Avert Concussion, Insist Researchers
Concussions and the possibly occurrence of complications following one, continue to be a grave ......

Choosing the Best Helmet for Winter Play
If children aren't speeding down the slopes, it's not winter in Canada! Canadian tobogganing is a .....