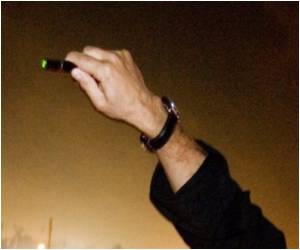 A teenage boy damaged his eyes while playing with a handheld laser pointer that he had bought over the Internet, according to a case reported on Wednesday by the British Medical Journal (BMJ).

The lad suffered dark spots, known as central scotomas, and loss of image sharpness after shining the green diode laser beam into his eyes, a trio of specialists from the Royal Liverpool University Hospital and Manchester Royal Eye Hospital concluded.

The eyes are the most complex part of the body after the brain. To learn more about the eye, its functions and the diseases that affect the eye participate in this quiz.
Advertisement

Tests revealed he had burned the surface of the eye and disturbed the retina, the light-catching tissue at the back of the eyeball.


Two months later, the boy's visual acuity returned to normal but he still had retinal damage.

The authors of the letter note that, in general, retinal injuries caused by lasers may be permanent and lead to some vision loss in later years.

Interactive section of Medindia gives details regarding anatomy of the Eye
Advertisement
It is the first known case of injury from laser pointers in Britain, they add.

Handheld laser pointers are designed for use in lectures, presentations or conferences to highlight an item of interest with a bright spot of light. But over the last 10 years, they have also become a popular consumer item, sometimes sold on keychains.

The type and power of the gadget in the BMJ's case report was not identified. Britain's Health Protection Agency advises that laser pointers should have less than one milliwatt (mW) power and be accompanied by safety information.