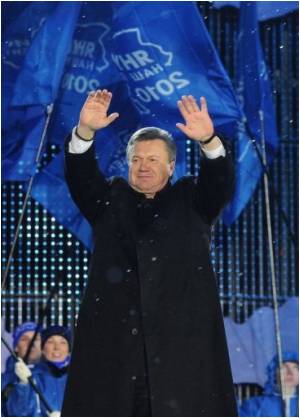 A new show in Kiev showcased giant crocodile skins, kitsch ornaments and a huge portrait of the owner dressed as a racing driver. These are just some of the items from deposed Ukrainian president Viktor Yanukovych's opulent palace.

When Yanukovych fled in panic in February amid deadly protests against his rule, thousands of Ukrainian demonstrators overran his luxury private estate some 15 kilometres (10 miles) from Kiev and were shocked by what they saw.

SWergNow several hundred of the items, ranging from tasteless bling to the downright bizarre, have gone on show at the National Art Museum of Ukraine in central Kiev.


Yanukovych's image is everywhere: on plates, busts and scores of portraits in every possible setting and pose.

There is even a framed certificate stating that Yanukovych went to the trouble of having a star named after him.
Advertisement
In one of the more bizarre portraits, Yanukovych is mocked up as a rally driver in blue and yellow overalls -- the national Ukrainian colours -- casually leaning on a red rally car.

Aside from the homages to himself, the display reveals Yanukovych as a prolific collector of kitsch.

Other collections include Greek and Roman-style bronzes of classical athletes and antique rifles.

Curator Alexander Roitburd said before the show opened to the public that he hoped what he called Yanukovych's "outrageous tastelessness" could serve as a lesson to visitors.

"If the fourth president of our poor country had at least a little less... redneck taste and maybe a slightly more modest house and cabinet, then the gang that surrounded him would probably have started to fight for modesty and democracy," Roitburd said.

"And then the level of corruption would have gone down."

The local English-language paper the Kyiv Post published a bill Yanukovych had for gold chandeliers worth some $41 million (30 million euros).

Another showed nearly $1,000 spent on a medical bill for an obviously much-loved fish.

The Ukrainska Pravda newspaper showed documents that appeared to confirm over $1.2 million was spent on furniture for one of the houses and about $10,000 more on name plaques for the animals in the zoo.

The pro-Western authorities now in charge in Kiev have given little indication as to what is planned for Yanukovych's waterfront mansion but it is expected to be handed over to the public.

The chief curator of the exhibition, Yulia Lytvynets, told AFP before the show opened they had been able to preserve "valuable masterpieces" from "looting, stealing and brutal destruction".

The aim of the display is "to let people know, the Ukrainian citizens, what was inside, what was behind closed doors, far from people's eyes for years."

She said she was surprised by the variety of objects recovered, ranging from "attractive pieces of art" to "absolute kitsch that is worth nothing".

"It's important to have this show to know where the money went," she added.

The former president was "addicted" to his expensive tastes, she said, which made an impact on his character.

"Instead of the normal things with which he was surrounded in his childhood, he surrounded himself with luxury things."

The exhibition runs until July 27.