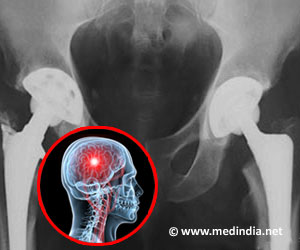 A private hospital in Kerala has successfully completed the first ever hip replacement surgery using a 3D model of the hip, the hospital authorities said.

A 60-year-old housewife from Kottayam was suffering from a painful hip and could not walk properly after she met with an accident in 2014.

Hip Replacement Surgery Does Not Improve Level Of Physical Activity

Research shows that there is no clear evidence of change in physical activity in patients following hip-replacement surgery.
Advertisement
‘A private hospital here has successfully completed the first ever hip replacement surgery in Kerala’

The surgery was performed last week at VPS Lakeshore Hospital by a medical team led by Bipin Theruvil, specialist in hip replacements.


A special software was used to process the CT scans of the patient's fractured hip and printed the same by using a 3D printer which took 18-hours to print. The model was an exact copy in size.

Persistent Opioid Use After Knee or Hip Replacement Surgery

The reasons patients continue to use opioids may be due to pain in other areas, self-medicating affective distress, and therapeutic opioid dependence.
Advertisement
The medical team performed a mock surgery on the 3D model in order to determine the position and exact size of the implants required.

"The final surgery lasted less than four hours and the patient was able to walk on the same day itself. This technology will revolutionise complex joint replacements as surgeons can achieve a high level of precision in complex cases," said Theruvil.

"The 3D printed hips offer surgeons an opportunity to plan and practice the surgery in complex cases and thereby saving operating time, reducing blood loss and in the end speeding up recovery," he added.

A 30-year-old woman underwent a hip replacement surgery years after meeting with an accident at a young age of 11 that left her with a thigh bone fracture.
Advertisement
<< 3-D Tissue Culture Models to Mimic Human Gut Infections
Major Food and Beverages Brands Fail India's Double Nutriti... >>

Surgery was a challenge as Mateshwari Devi had a medical history of bronchial asthma, which could have led to organ failure and other life-threatening problems.

Blood Pressure Calculator Iron Intake Calculator Sinopril (2mg) (Lacidipine) Loram (2 mg) (Lorazepam) Drug Side Effects Calculator Diaphragmatic Hernia Vent Forte (Theophylline) Find a Hospital Indian Medical Journals The Essence of Yoga
This site uses cookies to deliver our services. By using our site, you acknowledge that you have read and understand our Cookie Policy, Privacy Policy, and our Terms of Use