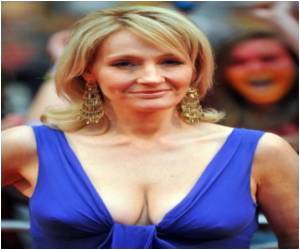 Harry Potter author, J.K Rowling, will give more of her £500million fortune to fund a new generation of doctors and scientists.

Rowling, 45, who is already reported to have given at least a tenth of her earnings to charity, has laid legal claim to the name Rowling so that she can set up an awards scheme for medical research.

Harry Potter author J.K. Rowling has given $15.4 million towards a Clinic which will treat and research Multiple Sclerosis, the disease that killed her mother.
Advertisement

In an application this week to the Intellectual Property Office, she filed papers to register the trademark, which covers the provision of 'scholarships, grants and bursaries' and 'organising competitions and awards'. It is in the development stage. When it is officially set up, that is when we can announce it," the Mirror quoted a spokesperson of the author as saying.


Last year, she donated 10 million pounds to fund a clinic named after her mother, Anne, at the Centre for Regenerative Medicine at Edinburgh University.

The world of Harry Potter has been used by an Oz psychologist to suggest ways of dealing with teenage depression in her new book.
Advertisement
<< Poor Lifestyle Responsible for Over 20,000 Cases of Breast ...
Surgery For Spinal Fracture Can Reduce Death Risk by 44% >>

JK Rowling's Harry Potter has gone on to win the title of The greatest entertainer of the decade after beating every TV show, film and song as well as YouTube and Facebook.

Clinical Trials - The Past and The Future
News Archive
News Resource
Advertisement
News Category
First Phase of Foot-and-mouth Disease Vaccination Shocking News: Polio Cases Return After a Decade in the US Death Caused by a Rare Type Amoeba: Research Study Japan Approves Smallpox Vaccine for Monkeypox Did Human Evolution Shrink Your Brain?
More News
Sign up for Wellness Consult a Doctor Sign up for Selfcare