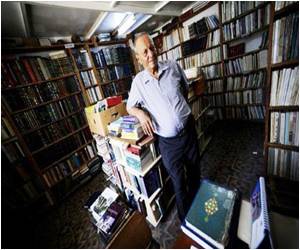 Jerome Ferrari won France's top literary prize, the Goncourt, for a Corsican epic about dashed hopes, set in a village bar on the troubled Mediterranean island.

"Le Sermon sur la Chute de Rome" (The Sermon on the Fall of Rome) tells of a young man who packs in his philosophy studies to open a bar on the island with an old friend, hoping to turn it into a haven of peace and friendship.

If kids are introduced to books when they are at the age four, a part of their brain involved in language and thought develops quickly, finds study.
Advertisement

But things take a radically different turn as drink, sex, corruption -- and the violence for which Corsica has become known -- cast their shadow over the young idealists' plans.


"Did you know that Barack Obama was re-elected today? Don't you think we should put things in perspective?" the novelist joked with reporters pressing him for a reaction to receiving the century-old prize.

While e-books are considered a recent innovation, researchers at Pew Research Center reveal that a 'generation gap' already exists among those who read e-books.
Advertisement
Born into a Corsican family settled on the mainland, Ferrari returned as an adult to teach high school philosophy in the Corsican capital Ajaccio. He now teaches in Abu Dhabi.

His Goncourt win comes with Corsica making headlines over a jump in violence, with 38 murders and 117 attempted murders since the start of 2011, for a population of just over 300,000 -- the highest homicide rate in Europe.

Most of the slayings, police believe, have been linked to feuds over control of protection rackets targeting tourist businesses and lucrative property development on an island that remains relatively unspoiled.

But this is no crime novel.

The Goncourt jury called the book a "fine parable on contemporary hopelessness, but with a hopeful message: the end of a world, doesn't have to spell the end of the world."

Its title refers to a sermon delivered by the mediaeval philosopher Augustine following the 410 sack of Rome, from which Ferrari quotes the lines, "The world is like a man, it is born, it grows and it dies."

Ferrari said he wanted to show how "the same mechanism can apply to empires, to a village bar or the hearts of men."

"Corsica is my natural literary milieu," he told AFP in a recent interview, explaining how he fell in with pro-independence activists as a 20-year old, writing at the time for a nationalist newspaper.

"This is very good news for Corsica -- it gives another image than one of violence," said the top French education official on the island, Michel Barrat.

The lesser-known Renaudot literary prize went to a Rwandan writer, Scholastique Mukasonga, for "Notre Dame du Nil" (Our Lady of the Nile), which tells of a group of young girls trying to escape the 1994 genocide.

Mukasonga, herself a Tutsi living in France, lost much of her family in the massacres. Her novel was a surprise win as it was not part of the official selection put before the Renaudot panel of judges.

For the Goncourt, Ferrari beat out competition from 11 novelists including the 27-year-old Swiss Joel Dicker for a crime novel openly inspired by the US master Phillip Roth -- to the extent of drawing an accusation of plagiarism.

"La verite sur l'affaire Harry Quebert" (The Truth About the Harry Quebert Case), tells of a young writer working to clear the name of his old mentor, accused of murdering a teenager 30 years earlier.

At odds with its mostly ecstatic reviews, France's Nouvel Observateur attacked the book as a "pale rehash" of Roth's classic work "The Human Stain," about a writer and his one-time professor unfairly accused of racism.

Parallels run from the broadly similar plotline to specifics like a main character born to a Jewish family in Newark, or the small US university town setting, in this case called Athena, the other Aurora.

But as Nouvel Observateur acknowledged, Dicker does make plain his debt to Roth -- whose name he gives to Quebert's lawyer in the novel.

After a sluggish start, electronic books are now gaining momentum among European readers, industry insiders have revealed.
Advertisement
<< Marijuana For Recreational Use In Colorado And Washington
Fish Oil may Not Really Prevent Irregular Heartbeat Post He... >>

Books can Keep You Healthy: Study

Low-Calorie Diet for Diabetes
View all
News Archive
News Resource
News Category
Is It Healthy to Let Your Mind Wander? Walk Till it Hurts: Good News for Peripheral Artery Disease Patients Plus Size Models and Social Media: Where Do They Fit In? Interrupted Sleep: Is It Good or Bad? Protecting Children from Negative Effects of Divorce?
More News
Sign up for Wellness Consult a Doctor Sign up for Selfcare