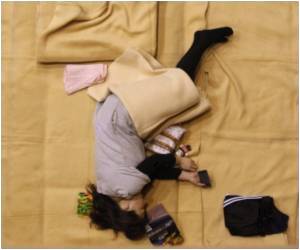 People fleeing Japan's crippled nuclear plant are being turned away from evacuation centres because of unfounded fears they might contaminate others with radiation.

Those made homeless by the emergency at the stricken Fukushima Daiichi atomic plant need local government-issued certificates proving they are not contaminated before they are allowed to step foot inside the centres.

Japan radiation scare spreads to tap water. Parents in Japan are really frightened by the tap water scare and are opting for bottled water from Tokyo's Bunkyo ward.
Advertisement

Screening facilities set up to soothe concerns over radiation have become checkpoints that determine access to a place to sleep and -- in at least one case -- healthcare, even though experts say evacuees pose no risk to others.

"People are simply over-reacting, and sadly this could lead to discrimination," he told AFP.

Restrictions on foods from Japan widens in Asia amid radiation concern. Supermarkets in Asia and restaurants in Little Tokyo are suffering from the Japan's food chain.
Advertisement
An eight-year-old girl from Minamisoma was refused treatment for a skin condition in a hospital in Fukushima city because she did not have a screening certificate, the Mainichi daily reported.

The girl's father, Takayuki Okamura told the paper: "I am worried already with my life as an evacuee. It was a real shock to have the appointment refused."

But those running evacuation centres are unapologetic.

An official at a centre in Fukushima city, said evacuees from within 30 kilometres (19 miles) of the plant "are requested to provide certificates. If they don't have them, they will need to be screened at the site.

"It's so that the rest of the evacuees can feel safe. It's a matter of peace of mind," added the man, who did not wish to be named.

The episode has echoes of the discrimination suffered by the 'hibakusha' -- the irradiated survivors of the atomic bombings of Hiroshima and Nagasaki -- who were shunned for fear they might make others ill.

The certificates are being issued by the Fukushima prefectural government, who say they seem to be the only way they can set minds at ease.

"Although evacuees normally shouldn't have to prove they have been screened in order to enter an evacuation centre, the situation is that there are some shelters that require them," said Yamagishi.

He said the prefecture was now issuing certificates that had "screening-approved" written above a prefectural stamp with the person's name, sex and date of birth.

"Since the people were not able to enter the evacuation centre, we were forced to issue these certificates to help out," he said.

Thousands of people left their homes after Fukushima Daiichi began leaking radiation into the air, sea and soil, contaminating farm produce and making its way into tap water.

The plant was swamped by the ferocious tsunami that hit Japan's northeast coast after the 9.0 magnitude earthquake of March 11, leaving almost 13,500 dead and 15,000 missing. Tens of thousands more were made homeless.

Reactor cooling systems were knocked out, allowing atomic cores to heat up uncontrollably and sparking a nuclear emergency now classified as a maximum level seven on an international scale, on a par with Chernobyl.

Everyone living within 20 kilometres of the plant was ordered to leave, while those a further 10 kilometres away were warned to stay indoors.

On Monday the government announced it was adding new areas to the exclusion zone, some of which lie well outside the 30-kilometre area, because of concerns over the effect of long-term exposure to radiation.

An official from Minamisoma city -- part of which Monday was added to the evacuation zone -- said even the youngest and most vulnerable are affected.

"Children have been rejected from evacuation centres. It's really sad for them to be told, 'Don't come near, don't come near'," said Sadayasu Abe, a secretary for the mayor of Minamisoma.

Kenji Sasahara, who heads a screening centre in Minamisoma, said many evacuees are angry at having to provide the certificates, especially as no member of the public he had screened had shown an elevated level of radiation.

"Of more than 17,000 people who were screened there no one was at risk, except for three plant workers," he said.

"This is a complete over-reaction. People are quite irate. Minamisoma now has this image that it is a 'contaminated city'," he told AFP by telephone.

Distrust of people from the area is spreading further afield.

One Fukushima prefecture woman who decided to evacuate her family to an area north of Tokyo wrote on her blog that a hotel in Saitama prefecture had refused to accept them as guests.

"When I explained that I was from an area that was not even in the voluntary evacuation zone... the clerk responded: 'You can't stay here unless you have been tested and can prove you're not a 'hibakusha'."

Spinach and milk found to have been contaminated with radiation in Japan are safe to eat and drink, says the World Health Organization.
Advertisement
<< Women's Self-Satisfaction After Viewing Thin-Ideal Images M...
Ex-aid Worker and Al-Qaeda Hostage Moves Malaria Research t... >>