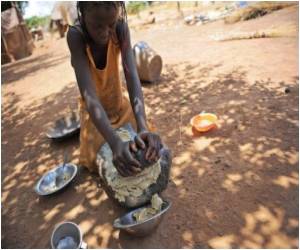 Frenchman Pierre Camatte went to Mali with eight kilogrammes of dried leaves from a medicinal herb and the dream of finding an alternative treatment for malaria ravaging the area.

His kidnapping by Al-Qaeda brought a savage halt to his years of work in the desert country, but not to his ambition; Camatte won't return to Mali after his ordeal but has instead transferred his project from Africa to a village in France.

"I don't want to go back to Mali," said the aid worker and ex-physical education teacher who now grows artemisia annua, often used in Chinese medicine, in greenhouses at his home in the eastern village of La Houssiere.


"Everything I should do there -- harvest, drying, treatment -- I do here with the help of a business that is creating jobs," said the Frenchman, in his early 60s.

Monkeys infected with an emerging malaria strain are providing a reservoir for human disease in Southeast Asia, according to research published today.
Advertisement
Armed men in turbans snatched Camatte from a hotel in Menaka in the remote Sahel region of northern Mali, more than 1,500 kilometres (1,000 miles) from the capital Bamako, during the night of November 25, 2009.

He was the first Frenchman to be kidnapped by the regional Al-Qaeda in the Islamic Maghreb (AQIM), which went on to capture several others including 78-year-old Michel Germaneau who was killed in July last year.

Camatte was held for three months in the Malian desert, saying on his return to France he had been beaten and his captors tried to convert him to Islam.

AQIM said it would execute Camatte unless four of its militants were freed from jail in Mali, a threat taken seriously after it killed British hostage Edwin Dyer in June 2009 when demands for a similar exchange were rejected.

The four were eventually released and so was Camatte, causing a diplomatic stir among governments in the area.

"I never acted carelessly. I have been operating in that region of Mali for 15 years," Camatte told reporters on his return to France. "I didn't think I was a target."

So it is in his village at the foot of the verdant Vosges Mountains National Park that Camatte chooses to pursue his goal of finding a cure for malaria which kills more than a million people a year, 90 percent of them in Africa.

The plasmodium falciparum parasite which is responsible for transmitting the most acute form of malaria is becoming increasingly resistant to traditional drugs and chloroquine in particular.

The World Health Organization has recommends the use of therapies that have as their basis the active ingredient of artemisia annua, called artemisinin, but because of limited production they are too expensive for many developing countries.

Camatte became involved in Africa as a volunteer for various aid groups and in particular one that was involved in the twinning of his hometown of Gerardmer in eastern France with Tidarmene in Mali.

"We did a lot of health work, we trained carers, built a dispensary," he said of his labours in Mali.

"While there I realised that everyone, or almost everyone, had malaria and that large numbers of women and children died from it, even though it can be treated," he said.

In 2007 he discovered a German non-government organisation Anamed (Action for Natural Medicine) which was working on a hybrid artemisia with a high level of artemisinin.

"I bought some seeds from them and carried out trials at my home in the Vosges," he said.

The plant takes six months to grow to a height of two and a half metres (eight feet) and is harvested just before blossoming. The leaves are then dried.

Camatte said five grammes a day infused in a litre of water for a week could treat malaria.

"I saw it worked so I thought of growing the plant directly there," he said. "So I left for Mali with eight kilos of dried leaves."

"When I got to Menaka, it was 50 degrees Celsius (122 Fahrenheit). I had to carry out several trials so the plant did not suffer too much from the heat.

"At the third attempt in November 2009, it was beginning to grow when I was kidnapped by Al-Qaeda in the Islamic Maghreb."

Back in La Houssiere, Camatte has picked up his work with local authorities subsidising the project, which is expected to create four full-time jobs.

Camatte's immediate aim is to gather 2,000 plants which should yield 300 kilos of dried leaves. He also wants to build up a network of distribution and treatment in Mali, relying on traditional women healers.

"The system is good, above all it is a real alternative to medicines that cost too much. And it is in tune with attitude there, using plants for healing," he said.

Scientists have found that antimalarial drug artesunate, which is derived from herbs used in Chinese medicine, is more effective than quinine at preventing death in patients with severe malaria.
Advertisement
<< Japan's Nuclear Evacuees Discriminated Against at Hospitals...
Germany Outraged By Real-Life Spillover of It's Youth Cyber... >>